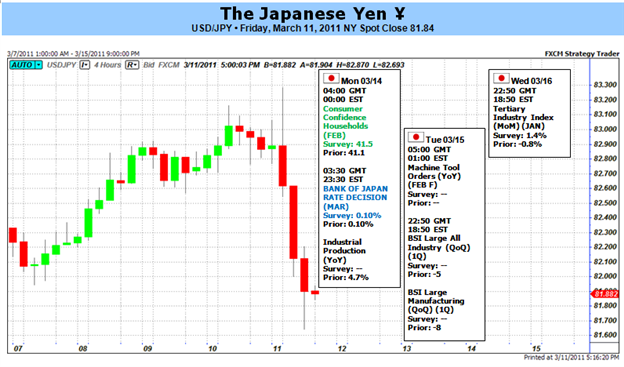 The Japanese yen was mixed against its major counterparts for most of this past week but that all changed headed into Friday’s session, after a major 8.9-magnitude earthquake shook investor sentiment. While the Yen was mixed down against its North American and New Zealand counterparts headed into Friday’s session, it ended the week up against all the major currencies, save the Australian dollar, as domestic investors rushed to buy the currency as a safe haven compared to the more volatile equity markets. While a global return to risk sentiment was weighing on the Japanese Yen, the earthquake coupled with the uncertainty spurred by the continued tensions in North Africa and the Middle East give little insight on the direction of the Pacific Rim country. Whereas sentiment was an important indicator of the direction of the recovery in Japan, now, the reaction of the government will likely be the leading indicator as to Yen strength or weakness.

The disaster is truly a setback for the country that was on the cusp of a recovery that was gaining some steam headed into the middle of the year. The leading index, a gauge of broader developments in the overall economy, gained for a fourth consecutive month this week, while bankruptcies were down. Furthermore, the Eco Watchers Survey, a sentiment reading of current conditions and an outlook of the economy in the coming months, also gained. In the week ahead, industrial production data for February is due, which is likely to show strengthening as production has been increasing steadily since November. Similarly, the Tertiary Industry Index for January is forecasted to gain 1.4 percent, marking what would be the third time in four months that industry has expanded. The Bank of Japan has announced that it will hold a limited monetary policy meeting on Monday, but with the devastation, further funding is necessary to help the recovery, and thus it is widely believed that additional economic stimulus will be announced. While this could potentially aide the Japanese economy and the Yen in the short-run, as the rebuilding process is generally perceived as positive given the necessary repatriation of funding, with a debt-to-GDP ratio over 200 percent already, further stimulus does not bode well for the long-term health of the economy nor the Yen; generally speaking, it would increase the yield differential between the Yen and the U.S. Dollar, a bullish sign for the USD/JPY pair on a valuation forecast.

Price was in a violent range this week, with the USD/JPY pair trading in 160-pip range since last Friday; now, traders will need to look towards the steps the Japanese government is taking in the short-term to help prop up the economy in the wake of the disaster. In turn, data from the United States will likely be the price driver for the coming week. Should sentiment gather that investing into the Japanese cleanup and recovery is the best option, the Yen could gain some serious strength in the coming months. As David Rodriguez noted earlier today, following the 1995 earthquake outside of Kobe, Japan, the USD/JPY pair fell to an all-time low of 78.750; it would be interesting to see if the same development could occur once more. -CV