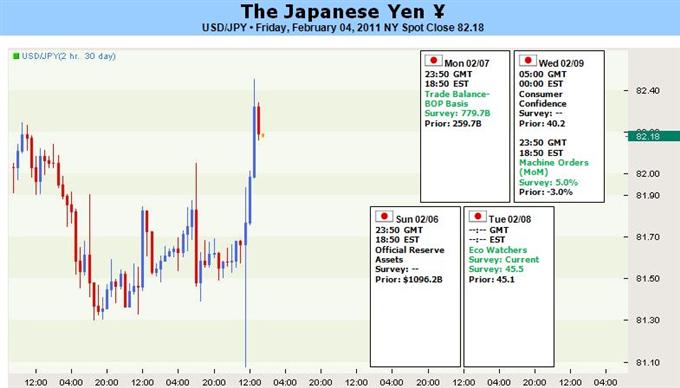 Japanese Yen Weakness Could Be Short-Lived, Consolidation Ahead

Japanese Yen Weakness Could Be Short-Lived, Consolidation Ahead

The Japanese Yen weakened against the U.S. dollar for the first time in four weeks, with the exchange rate advancing to a high of 82.45 on Friday, but the near-term rally in the USD/JPY could be short-lived as the pair continues to trade within the downward trend channel carried over from January. The DailyFX Speculative Sentiment index continues to reinforce a bearish outlook for the dollar-yen as retail traders remain heavily net long against the pair, and the exchange rate may pare the advance from earlier this month as investors diversify away from the greenback.

Meanwhile, former Bank of Japan official Masayuki Matsushima warned that the “bond bubble” may burst over the medium-term as the government struggles to manage its public finances, and implored the administration to “increase the consumption tax rate” after Standard and Poor’s cut the region’s credit rate to AA-. As Japan holds the top seat amongst the industrialized countries for the largest budget deficit, the tepid recovery could make it increasingly difficult for Prime Minister Naoto Kan to manage the risks for the region, and the central bank may weigh different alternatives to stimulate the ailing economy as it aims to promote a sustainable recovery. As the marked appreciation in the exchange rate continues to dampen foreign demands, the BoJ may look to intervene in the currency market once again as the benchmark interest rate remains close to zero, but the technical outlook continues to reinforce a bearish outlook for the USD/JPY as the pair fails to retrace the decline from the previous month.

The USD/JPY appears to be in a small consolidation phase as the technical outlook continues to point to further decline, and the exchange rate may trend sideways over the near-term before we see another break to the downside. As the rebound in the dollar-yen tapers off ahead of the upper bounds of the downward trending channel, currency traders may take advantage of the range-bound price action over the following week, and the pair may continue to retrace the rebound from back in November as the U.S. dollar struggles to regain its footing. - DS