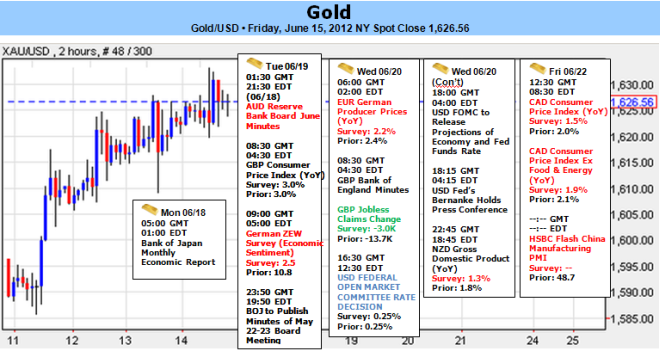 Gold is markedly firmer at the close of trade this week with the precious metal advancing 2.09% to close at $1626 in New York, marking its largest weekly advance since the first week of June. The price of bullion rose steadily throughout the week ahead of major event risk next week with key elections in Greece and the FOMC rate decision on tap. The rise in gold prices has been accompanied by a decline in the greenback which closed the week off by nearly 0.80% after G20 officials cited preparations for a global coordinated intervention to thwart off risks of a liquidity crunch as market participants weight the implications of a Greek-euro exit.

All eyes will be fixated on Greece this weekend as voters head back to the polls for parliamentary elections with the outcome likely to determine the country’s future in the Euro-zone. With global central banks reaffirming their commitment to provide added liquidity should the Greek vote rile markets, it’s likely gold will remain well supported as the injection of liquidity prompts investors to shift away from fiat currencies on inflationary concerns. While the results of the election will weigh heavily on broader risk-appetite, what is more crucial to gold’s prospects are how the major global central banks – the Federal Reserve and the European Central Bank – respond to a disappointing election result. Indeed, chatter on June 14 suggested that G20 leaders were discussing a globally coordinated intervention to help support the Euro-zone. While we don’t suspect a major announcement over the weekend, the upcoming Federal Reserve policy meeting offers clues as to when this might occur.

The FOMC rate decision on Wednesday highlights the most significant event risk for the precious metal. With domestic economic data starting to soften again, recent rhetoric from Fed officials suggests that there is growing rift within the Federal Reserve with regards to whether or not to embark on another round of quantitative easing. As such, the implications of next week’s FOMC decision for gold may be substantial as market participants begin to factor the probability of further Fed easing. Look for the dollar to offer some clarity with the greenback likely to come under substantial pressure should officials signal intent to intervene in markets in an effort to support the fragile recovery. Such a scenario would likely fuel a rally in gold that takes the precious metal through key resistance at $1628.

From a technical standpoint, gold remains within the confines of a descending channel formation dating back to the February highs with the price closing the week just below the confluence of channel resistance and the 38.2% Fibonacci retracement taken from the February 29th decline at $1628. A breach above this level exposes resistance targets at the confluence of the 50-day moving average and the 50% retracement at $1659 and the 200-day moving average at $1675. Interim support rests with the 23.6% retracement at $1590 and is backed by the June low at $1545. It’s important to note that last month gold broke below trendline support dating back to 2008 with only a full on pledge for further easing from the Fed likely to rehabilitate the break. Look for prices to take cues off of developments in Greece and the FOMC rate decision with increased speculation of further global central bank easing likely to keep gold well supported early next week.