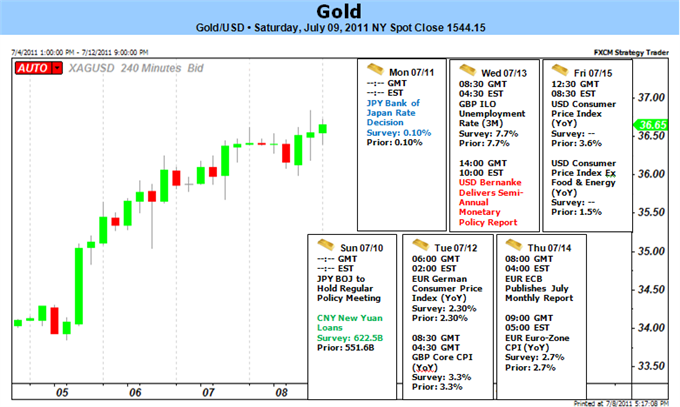 Gold had its strongest week since November 2009, gaining 3.80 percent to $1544.00 from $1487.43, ensuring that the precious metal would not close below $1500 for the second consecutive week; Bullion has closed at or above $1500 for seven of the past eight weeks. Further signs of instability in the Euro-zone coupled with rising inflationary pressures across the globe, most notably shown by the People’s Bank of China raising its deposit and lending rates by another 25.0-basis points each, boosted investor demand for Gold. It appears that, heading into the coming week, the precious metal could continue to be bid higher, with a smattering of inflationary data due from across the globe.

Although Bullion continues to trade off of its all-time high of $1577.40, which it reached back on May 2, its clear that market participants are actively bidding up the precious metal, as well as other commodities, in the face of economic uncertainty. Today’s nonfarm payroll report from the United States, which showed that a mere 18K jobs were added to the economy, versus the 105K estimated, according to a Bloomberg News survey, underscored a week of uncertainty.

Looking forward to the week ahead, inflationary data out of Europe and North America will likely guide precious metals, aside from general market sentiment over the uncertainty of the global recovery. On Tuesday, German CPI figures are due for June, though they are the final figures, so the market impact is likely to be limited. However, considering Germany is the Euro-zone’s strongest economy, and thus price pressures in Germany largely dictate European Central Bank rate decisions, a missed forecast for the final reading could drastically shift Gold’s momentum, as a classic hedge against inflation. Similarly, with British inflationary data due on Tuesday as well, similar pressure will likely be applied to precious metals. Also noteworthy is the consumer price index release from the United States on Friday, which, although Federal Reserve Chairman Ben Bernanke has stated numerous times that inflationary is merely “transitory,” further price pressures in the United States will absolutely boost demand for Gold as a safe haven.

On a technical basis, the pair bounced off of its 100-DMA last week on Friday at $1483.13, finding significant momentum to the upside, pushing through its 20-DMA and 50-DMA on Wednesday, at $1520.37 and $1519.72, respectively. Further gains are possible, with various technical indicators pointing towards Bullion strength. The daily RSI continues to gain, up to 59, from 37 last Friday. Similarly, the MACD Histogram turned positive yesterday, and the differential widened further into a bullish divergence today, at +21. Also pointing towards further gains is the Slow Stochastic oscillator, with the %K greater than the %D, at 70 and 58, respectively. The technical picture fits neatly in with a fundamental picture centered around rising inflationary pressures, which has historically led to investors shifting their exposure more heavily weighted in Gold. –CV