The Bank of England delivered a 25bps rate rise to 0.5%, as widely expected. The surprise came from the fact that there was a vote split on a large hike, with four members voting in favour of a 50bps hike. In turn, with the Bank suggesting that further rate hikes could be needed, money markets are now pricing in a 25bps hike in each of their next four meetings. However, while the decision itself was a hawkish surprise, Governor Bailey’s press conference had been somewhat on the dovish side, in which the message seemed to be, frontload with hikes now, then stop and reassess.

Interestingly, within the MPR, the yield curve assumption used by the BoE had been the Bank rate peaking at 1.4% in mid-2023, below current money market pricing. What’s more, their 3yr projected inflation rate is the lowest since 2011, providing another indication that the neutral rate will be below current pricing. As it stands, the rates market is currently pricing in the Bank Rate to hit 1.5% by the end of the year.

Yield Curve Inversion Watch The chart to watch that the UK could be making a policy mistake and tightening into a slowdown in the UK 2s10s curve. As we have seen in the past and has been well-documented previously, inverting yield curves is not a good sign for the outlook. A reminder that prior inversions of the curve happened in August 2019 and 2008. 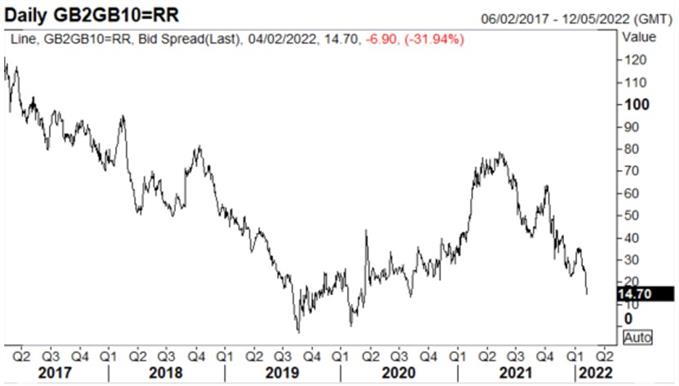 Looking ahead to next week, the economic calendar is rather light from a UK standpoint with only the preliminary Q1 GDP reading due. My view is that the data is unlikely to be materially market-moving for currency unless the data significantly deviates away from consensus. For two reasons I have this view, firstly the data is somewhat backwards-looking and secondly, the focus for traders is on inflation. Elsewhere, the ebb and flow of risk appetite will be the key driver for the Pound.

The weekly close will be important to watch, as a close at current levels would mark a key weekly reversal. Over the past year, it has been a typical theme for EUR/GBP to grind lower followed by a sharp move higher, rallies were sold amid the view of BoE/ECB policy divergence. However, now that Lagarde has opened the door to possible rate hikes from the ECB, the view is now one of policy convergence and thus the bias to fade EUR/GBP rallies may be over for now. Eyes on the 200DMA situated at 0.8514. 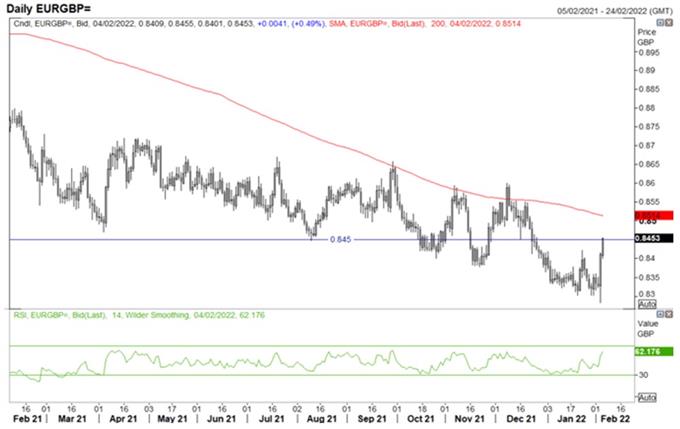