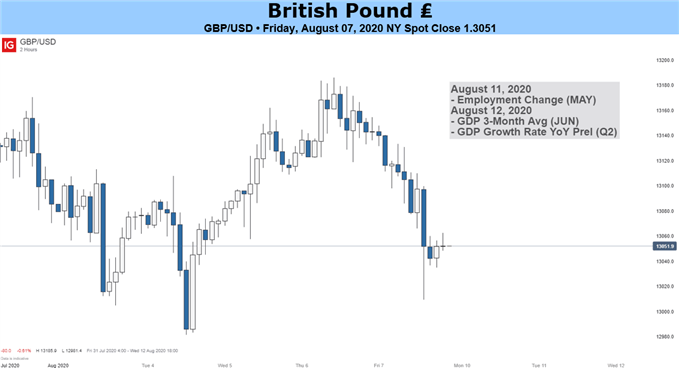 The British Pound remains suspended by political angst over the resolution of an almost five-year divorce agreement between the United Kingdom and European Union. Last week, EU chief Brexit negotiator Michel Barnier tweeted guidelines for businesses to prepare for potential cross-border friction after the December 31, 2020 deadline. In the report, it states that:

“There will be broad and far-reaching consequences for public administrations, businesses and citizens as of 1 January 2021, regardless of the outcome of negotiations. These changes are unavoidable and stakeholders must make sure they are ready for them” –European Commission.

The British Pound subsequently trimmed some of its gains. The UK and EU have scheduled trade-related talks throughout the fall, specifically up until October 2. European officials stressed the need to have a deal to present by that point to allow ample time for the 27 European leaders to review it, ask for amendments and or ratify it.

Friction between EU and UK policymakers leading up to that point could cast a deep, dark bearish shadow over the politically-sensitive British Pound. Already the exchanges between Mr. Barnier and his counterpart David Frost, have – apropos to his name – sent a chilling message about bilateral trade talks. These discussions and uncertainties around them may curb gains in GDP until there is more clarity.

Sterling traders will also be anxiously waiting for the release of preliminary Q2 UK GDP data. These figures are unlikely to show an underlying optimism. One source of variability and uncertainty is not only what official estimates may be but how the actual reading will deviate from it.

If one thing was made clear by Bank of England Governor Andrew Bailey at last week’s policy meeting, it’s that the economic situation entails an “awful lot of risk”. He said monetary authorities are ready to increase the pace of asset purchases if necessary, and to “lean in” to support the UK economy. Officials see GDP falling 9.5 percent in 2020, with expectations that unemployment is set to “materially” rise.

When asked about negative rates, Mr. Bailey said that this measure is in the toolbox, but that officials have no intention of using it. The central bank made it very clear that it will not tighten rates until inflation is sustainably above its target, signaling that a prolonged state of easing is likely to be around for quite some time. With that in mind, the British Pound will likely continue to experience pressure from this end.