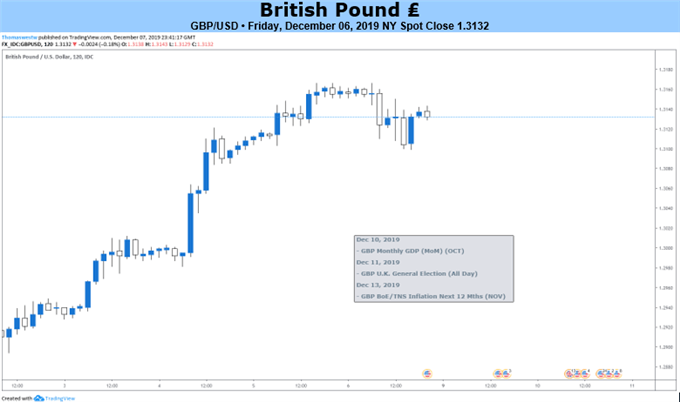 If the latest Guardian poll of polls is accurate, Boris Johnson will remain as Prime Minister after next Thursday’s votes are tallied and will have a working majority in the UK Parliament, leaving him free to push through Brexit by the end of January 2020. While polling intentions can change in a short-time frame, the current lead looks nearly unassailable, unless the Boris Johnson shoots himself in the foot, something he is quite capable of doing.

Other polls will be released over the next few days and they may show the Conservative lead narrowing, but there will need to be a massive sentiment shift to pluck the keys to No.10 Downing Street out of Johnson’s hands.

While it would be easy to give Sterling a bullish forecast, I will rein things back and stay neutral, not because I think Sterling is going to fall, but on the basis that a lot of the expected ‘Brexit-Bounce’ in GBP has already happened and further rallies may be limited. The British Pound has rallied against a wide range of currencies since bottoming out in early-September and expectations are high that, all things being equal, this rally will continue early next week, although at a slower rate of trajectory.

The last Commitment of Traders (CoT) report showed that Sterling short positions had increased, while IG sentiment also showed that retail clients were short of GBP/USD. These shorts may soon become squeezed, if they haven’t been already, as we head towards election day.

IG Client Sentiment shows that traders are 58% net-short GBP/USD, a bullish contrarian bias. However daily and weekly positional shifts give us a bearish bias.

On the daily GBPUSD chart, the golden cross – 50-dma trading up through the 200-dma – made on November 11, has worked out well, with the pair rallying towards, but just missing, the May 3, 2019 swing-high at 1.3172. If this level is broken convincingly, then GBPUSD should move back towards 1.3382, before exhaustion starts to set in. This would show a GBPUSD rally of 12% in seven-months. The CCI indicator t the bottom of the chart shows the pair are currently overbought. What is your view on Sterling (GBP) – bullish or bearish?? You can let us know via the form at the end of this piece or you can contact the author at nicholas.cawley@ig.com or via Twitter @nickcawley1.