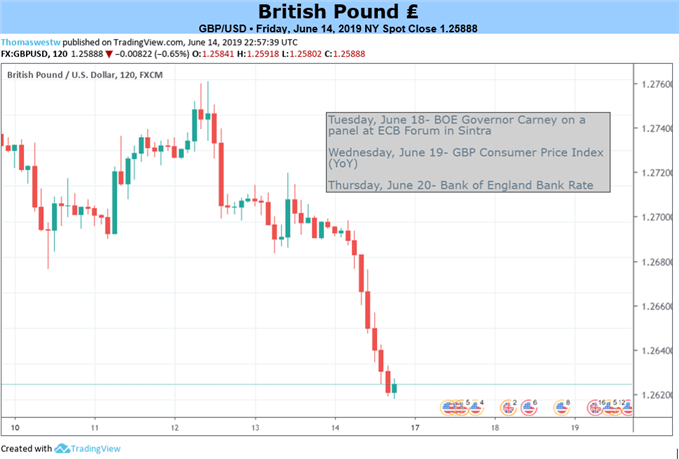 GBPUSD holds a narrow range as the UK Leadership Contest gets underway, but the Bank of England (BoE) meeting on June 20 may shake up the near-term outlook for the British Pound if the central bank alters the forward guidance for monetary policy.

The British Pound may face range-bound conditions as the BoE is widely expected to retain the current policy, but fresh data prints coming out of the UK may sway the monetary policy outlook as the Consumer Price Index (CPI) is expected to narrow to 2.0% from 2.1% per annum in April, while Retail Sales are projected to fall 0.8% in May.

Signs of a slowing economy may produce headwinds for the British Pound as it puts pressure on the Monetary Policy Committee (MPC) to abandon the rate hiking cycle, and Governor Mark Carney and Co. may gradually change their tune over the coming months amid the persistent threat of a no-deal Brexit. In turn, BoE officials may adopt a more dovish tone as the “economic outlook will continue to depend significantly on the nature and timing of EU withdrawal,” and a material adjustment in the forward guidance for monetary policy may undermine the recent rebound in GBPUSD as it spurs speculation for a change in regime.

In contrast, more of the same from the MPC may keep the British Pound afloat as “the Committee continues to judge that, were the economy to develop broadly in line with its Inflation Report projections, an ongoing tightening of monetary policy over the forecast period, at a gradual pace and to a limited extent, would be appropriate to return inflation sustainably to the 2% target at a conventional horizon.”

As a result, GBPUSD may continue to consolidate if the BoE sticks to the same script, but retail sentiment remains stretched despite the range-bound conditions, with retail FX traders still net-long Pound Dollar. 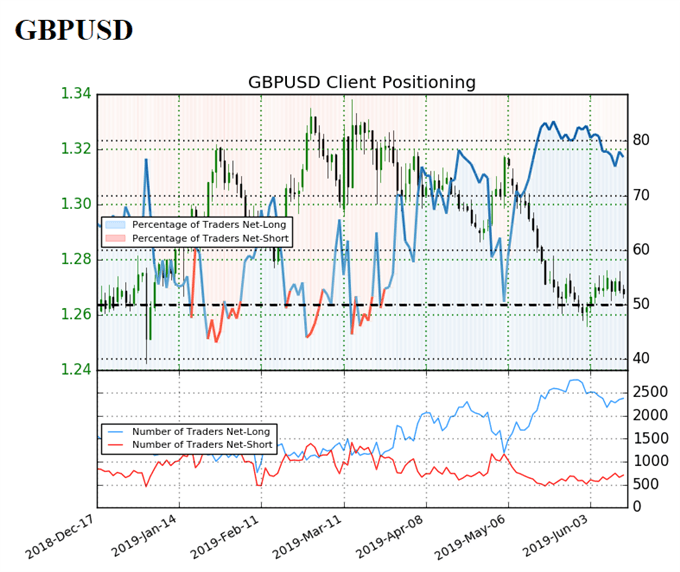 The IG Client Sentiment Report shows 77.1% of traders are still net-long GBP/USD compared 79.8% in late-May, with the ratio of traders long to short at 3.36 to 1. Keep in mind, traders have remained net-long since May 6 when GBPUSD traded near 1.3230 even though price has moved 3.4% lower since then.

The number of traders net-long is 1.8% higher than yesterday and 1.5% lower from last week, while the number of traders net-short is 4.5% lower than yesterday and 0.9% higher from last week. The persistent tilt in retail sentiment offers a contrarian view as GBPUSD snaps the upward trend from late-2018, with the Relative Strength Index (RSI) highlighting a similar dynamic. 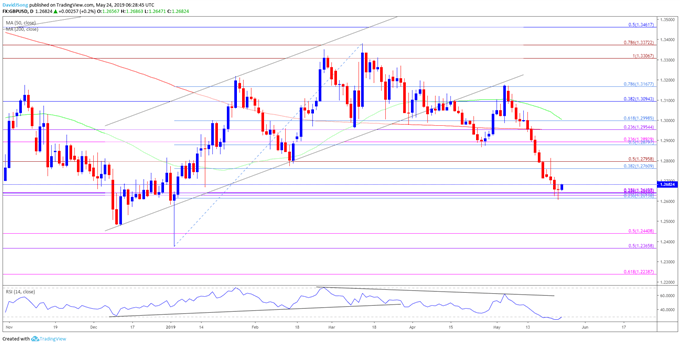 Keep in mind, the broader outlook for GBP/USD is no longer bullish as the exchange rate snaps the upward trend from late last year after failing to close above the Fibonacci overlap around 1.3310 (100% expansion) to 1.3370 (78.6% expansion).

Will keep a close eye on the RSI as the oscillator extends the bearish formation from earlier this year, with a move below 30 raising the risk for another selloff in the exchange rate as it suggests the bearish momentum is gathering pace.