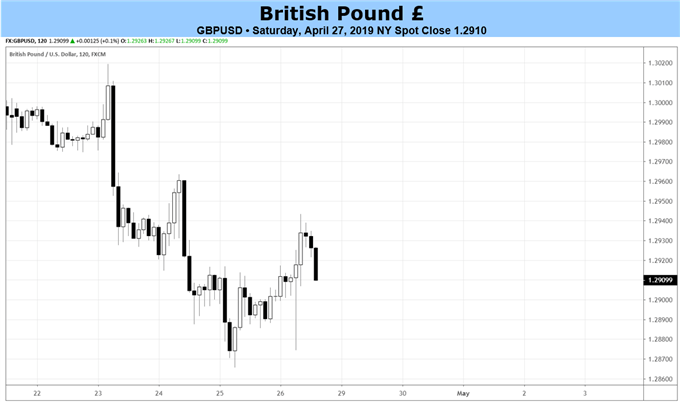 - With Brexit talks still dominating traders’ attention when it comes to the British Pound, the May Bank of England meeting will likely see policymakers sidelined – again.

- With the end of April around the corner, time is running out for UK PM May and Labour party leader Corbyn to find common ground to pass the EU-UK Withdrawal Agreement through UK parliament.

- The IG Client Sentiment Index shows that retail net-longs increased in GBPUSD, despite the pair falling to its lowest level since February 15.

The British Pound had a tough week back after the Easter holiday, losing ground against five of its seven other major counterparts. GBPJPY fared the worst, losing -0.81%, while GBPUSD fell by -0.64% to its lowest level since February 15 in the process. Finishing out the safe haven trifecta, GBPCHF also slipped, by -0.07%.

The lone holdouts for British Pound strength last week don’t come as much of a surprise. EURGBP’s pullback of -0.32% was motived by ongoing weakness in the entire EUR-complex thanks to rising concerns about deteriorating growth conditions juxtaposed against an overly optimistic European Central Bank. Elsewhere, GBPAUD added 1.03%, boosted by the soft performance in Q1’19 Australia inflation data.

With UK parliament on holiday until April 23, news flow around Brexit has been limited over the past two weeks. But the little information we’ve received, in drips and drabs, does not appear to bode well for the near-term process.

The latest Brexit headlines suggest that UK Prime Minister Theresa May and Labour party leader Jeremy Corbyn remain a significant distance apart in the cross-party talks. If not enough common ground is reached by the end of April, it’s possible that the Labour party calls for a “no confidence” vote for the prime minister.

While her own party’s attempt to restart its own no confidence vote this week was deemed illegal – PM May is protected from a party vote until December 2019 – its rather clear that her popularity is extremely low and ability to govern has been decimated. It’s very possible that PM May’s tenure as prime minister has reached its final stages. A general election may not be that far away – particularly as the May 22 deadline to avoid participation in European parliamentary elections approaches.

For all of the negative attention on the latest Brexit headlines, UK economic data has been quietly good – or at least, better than markets have been anticipating. The UK Citi Economic Surprise Index clocked in at -10.2 three-months ago and at 16.4 at the end of March. Now, the gauge of economic data momentum has turned up to 46.2. The real question is: does any of this matter?

Impact of BOE Meeting on Sterling

Unfortunately for the British Pound, the better than expected performance of UK economic data has been ignored by markets due to the overhang of the Brexit talks. There’s little reason to think that the Bank of England will break its long-held policy of not making any significant pronouncements during the Brexit negotiating window to remain as apolitical as possible.

Given the timing – the new Quarterly Inflation Report (QIR) is due out at this meeting – traders will likely find the following statistic somewhat dejecting: overnight index swaps are pricing in less than a 1% chance of a rate move in either direction at the May BOE meeting. Such is the case for the next meeting as well; odds of a rate move (in this case, a 25-bps hike) don’t rise above 25% at any time in 2019.

Typically, meetings from the major central banks (be it the BOE, Fed, ECB, etc.) that produce new staff growth, inflation, and jobs predictions often yield some of the more volatile trading environments during the entire year. But the BOE has adopted its vow of silence, and there’s no still clarity over the Brexit endgame, so it is our base case scenario to see minimal impact on the GBP-crosses because of the May BOE meeting.

Finally, looking at positioning, according to the CFTC’s COT for the week ended April 23, speculators are barely active in the British Pound’s futures contract, holding a mere 1,835 net-short contracts. This is an insignificant shift from last week, when 922 net-long contracts were held. For context: three-months ago, during the week ended January 22, there were 52.1K net-short contracts held by speculators.