GBP Forecast: Will Sterling Stabilize with Brexit Risk in the Distance?

Since Theresa May suffered a third defeat over her Brexit Withdrawal Agreement, the Prime Minister has been conducting cross-party talks with Labour party leader Jeremy Corbyn. As British Parliament struggles to overcome its ongoing impasse regarding the next path for Brexit, the European Council agreed to extend Article 50 for a second time in order to avoid a hard-Brexit where the UK departs the EU without a deal. With the Brexit deadline now pushed back until October 31 and British MPs on recess for the last two weeks due to the Easter Sunday holiday, GBP price action has stabilized alongside collapsing implied volatility.

Although Parliament is due to resume its session this coming week, little is scheduled next week in the House of Commons. There will be some Parliamentary business on Tuesday, however, but the motions are regulatory in nature and are not expected to directly impact ongoing Brexit negotiations. On Wednesday at 11:00 GMT, the Prime Minister will address the Main Chamber and take questions from British MPs which will hopefully provide an update on the latest Brexit developments.

That being said, the next Brexit steps and upcoming EU Parliamentary elections will likely prove pivotal for GBP prices over the short and medium term. Forefront risks highlight the ongoing cross-party talks between May and Corbyn as well as the possibility of Tories ousting the Prime Minister from her position. 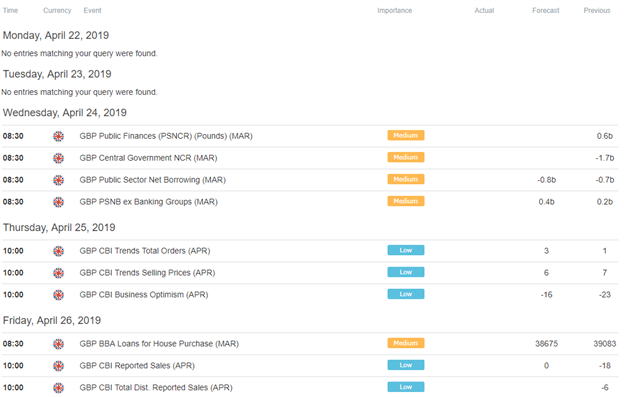 Honing in on the Pound Sterling economic calendar we can see that next week will be relatively quiet on the data front. Financial reports covering the public sector net borrowing released on Wednesday at 8:30 GMT and loans for house purchases expected Friday at 8:30 GMT will likely take the spotlight for upcoming UK economic data.

Also, with GBP bulls overlooking tepid inflation data, robust employment and retail sales numbers last week data could provide the British Pound with a positive tailwind. It is probable and should come as no surprise, however, that the progression of Brexit talks and related headlines will overshadow macroeconomic data and serve as the primary driver of GBP performance.

Whether you are a new or experienced trader, DailyFX has several free resources available to help you: a comprehensive education center, a proprietary indicator for monitoring trader sentiment; informativetrading guides and forecasts; analyticalwebinars held daily, and much more.