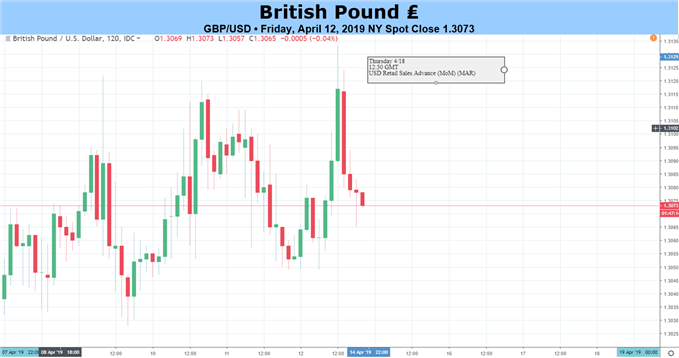 GBP/USD recoups the losses from earlier this week as the European Union (EU) pushes the Brexit deadline out to October 31, and fresh data prints coming out of the U.K. may fuel the advance from the monthly-low (1.2987) should the developments put pressure on the Bank of England (BoE) to further normalize monetary policy.

Looking for a technical perspective on the GBP ? Check out the Weekly GBP Technical Forecast.

Headlines surrounding the Brexit saga may generate increased volatility in the British Pound as Chancellor of Exchequer Philip Hammond insists that a deal can be reached over the coming weeks, and it remains to be seen if Prime Minister Theresa Maywill be able to deliver a meaningful announcement going into the Easter holiday as U.K. lawmakers struggle to meet on common ground.

In turn, updates to the Consumer Price Index (CPI) may shake up the near-term outlook for GBP/USD as the headline reading for U.K. inflation is anticipated to increase to 2.0% from 1.9% per annum in February. The core rate is also expected to nudge higher, with the index projected to print at 1.9% in March compared to 1.8% the month prior, and signs of sticky price growth may push the Bank of England (BoE) to adopt a more hawkish tone as ‘the Committee continues to judge that, were the economy to develop broadly in line with those projections, an ongoing tightening of monetary policy over the forecast period, at a gradual pace and to a limited extent, would be appropriate to return inflation sustainably to the 2% target at a conventional horizon.’ 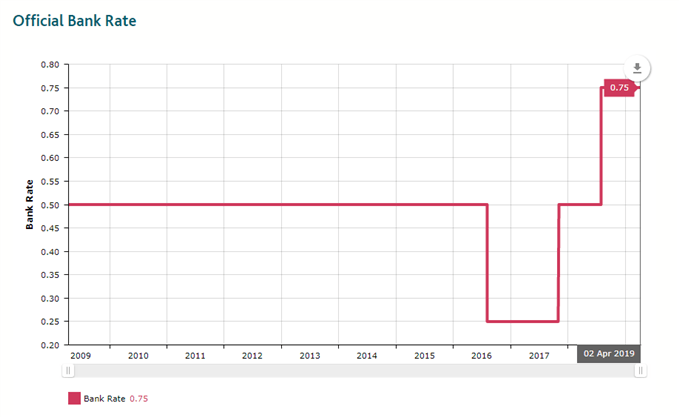 Keep in mind, the BoE appears to be in no rush to implement higher interest rates as ‘shifting expectationsabout the potential nature and timing of the United Kingdom’s withdrawal from the European Union have continued to generate volatility in UK asset prices, particularly the sterling exchange rate,’ and the Monetary Policy Committee (MPC) may largely refrain from altering the forward-guidance at the next quarterly meeting on May 2 as officials warn that ‘the monetary policy response to Brexit, whatever form it takes, will not be automatic and could be in either direction.’

With that said, positive data prints coming out of the U.K. may spark a bullish reaction in the British Pound as it puts pressure on the Governor Mark Carney and Co. to prepare U.K. households and businesses for higher interest rates, but the recent pickup in British Pound volatility continues to shake up market participation amid an ongoing shift in retail interest. 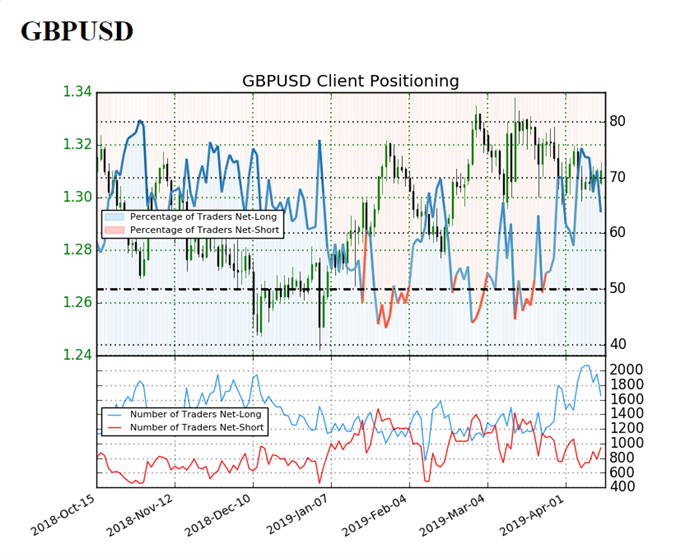 The IG Client Sentiment Report shows 63.8% of traders are now net-long GBP/USD compared to 72.7% earlier this week, with the ratio of traders long to short at 1.76 to 1. Keep in mind, traders have been net-long since March 26 when GBP/USD traded near 1.3200 handle even though price has moved 0.8% lower since then.

The number of traders net-long is 10.9% lower than yesterday and 12.6% lower from last week, while the number of traders net-short is 1.1% higher than yesterday and 4.4% higher from last week. Net-long interest has fallen back from an extreme reading, with the change indicative of profit-taking behavior as GBP/USD extends the rebound from the monthly-low (1.2987), while net-short interest recovers after narrowing during the previous week.

The recent developments raise the risk for range-bound prices as retail sentiment falls back from an extreme reading, but the GBP/USD appears to be coming off of channel support, with the Relative Strength Index (RSI) appears to be highlighting a similar dynamic as it threatens the bearish formation carried over from the previous month. 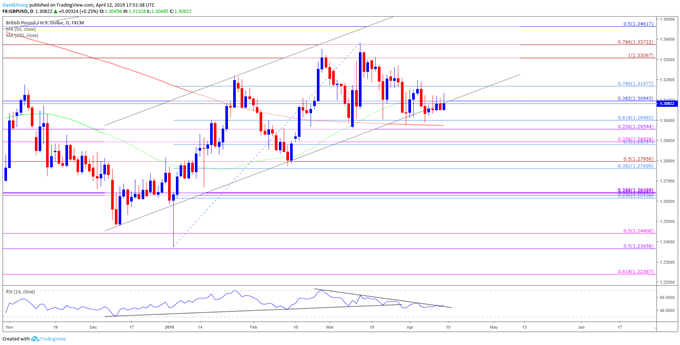 The broader outlook for GBP/USD remains mired by the failed attempt to close above the Fibonacci overlap around 1.3310 (100% expansion) to 1.3370 (78.6% expansion), but the pound-dollar exchange rate appears to be finding channel support amid the lack of momentum to test the March-low (1.2960).