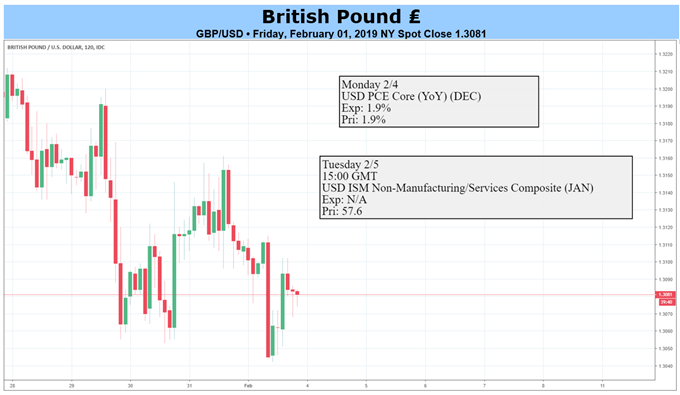 Sterling ends the week lower across the board but while negative sentiment may have increased, the short- medium-term fundamental outlook for the British Pound remains positive for now as supportive technical levels hold sway.

Brexit negotiations continue to run Sterling and this week’s events have weighed slightly on GBP after various amendments were taken off the table in a series of votes in Parliament, leaving a No Deal Brexit still possible. And, as fully expected, the EU immediately rebuffed UK PM May’s attempts to reopen discussions on the Irish backstop impasse. Looking forward the UK PM now needs to get a majority behind a UK deal that she can present to the EU. If the EU believe that PM May’s deal does command a majority, discussions will then take place in earnest to prevent a No Deal scenario, probably via flexibility over the Irish border.

Ahead, the first ‘Super Thursday’ of 2019 with the release of the latest Bank of England monetary policy decision and the Quarterly Inflation Report (QIR). With less than two months until the UK is scheduled to leave the EU, these reports may not have the normal heft, but it is important for the BoE to keep markets fully informed of any potential policy changes ahead, whatever the Brexit outcome. The QIR will highlight any potential build up of price pressures on the back of a strong jobs market, with UK wages also continuing to press higher despite the ongoing Brexit uncertainty.

GBPUSD is down on the week but is only one-and-a-half cents lower than its recent 14-week high. The chart remains positive – above all three moving averages – and the recent sell-off looks to be more of a small retrace after the pair hit overbought conditions just over a week ago.

IG Client Sentiment data show 49.2% of traders are net-long GBPUSD. We typically take a contrarian view to crowd sentiment, and the fact traders are net-short suggests that GBPUSD prices may continue to rise. However, the combination of recent daily and weekly positional changes suggest that prices may move lower.