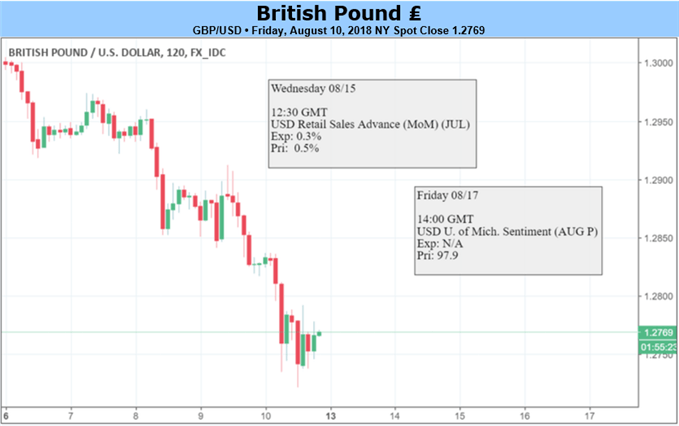 The market continues to push GBP lower, but investors need to take care if taking a short Sterling position, with one closely followed technical indicator flashing up ‘oversold’ market conditions. GBPUSD has been hit down to a one-year low around 1.2770 which could provide a base for the pair. EURGBP has traded above 0.9030 but quickly reversed and would need another strong driver to break higher again as the euro begins to price in potential banking problems due to the systemic weakness of the Turkish Lira. The RSI indicator for both these pairs is either on or in oversold territory and should be watched closely.

Ahead, the data calendar has UK employment and wages data on Tuesday at 08:30 GMT and the latest inflation release of Wednesday at the same time. Unemployment is expected to stay steady at 4.2% while wages, both with and without bonuses, are seen nudging a fraction higher. Inflation is also set to remain steady with a slight chance of an upside beat, with higher oil prices and a weaker British Pound the likely drivers.

DailyFX Economic Calendar for the week ahead. We will be taking a more in-depth look at UK data releases Brexit and other UK asset market drivers on Monday at 10:30GMT during our UK Key Events and Markets Webinar.

This week a story in The Timessuggested that EU members may be willing to let the UK stay in the common market for goods and allow them to be in control of freedom of movement, one of the four pillars that the EU has previously stated could not be moved. Sterling nudged a fraction higher as this story rippled through the market before the US dollar’s latest surge saw GBPUSD go below 1.2800.