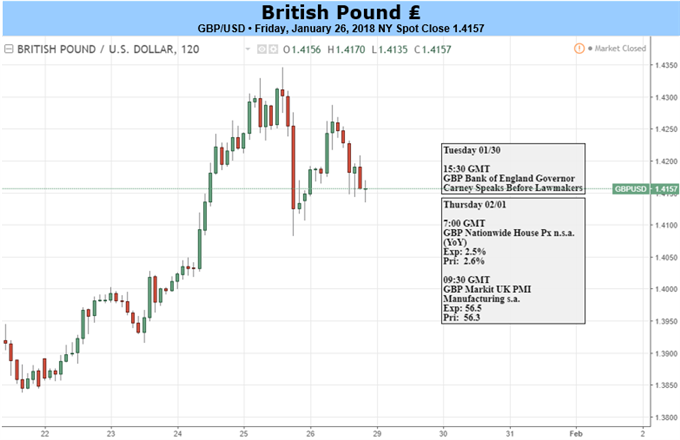 We remain fundamentally positive on GBP - as we have for the past couple of weeks - and look for further gains ahead, although the velocity of movement may slow down with Sterling currently sitting at relatively lofty levels. The latest set of data releases have seen inflation inched down – from 3.1% to 3% - while average UK wage growth nudged a touch higher - to 2.4% from 2.3%. While UK real wages remain negative, any narrowing of the inflation/wages gap will be welcome, especially by the weak retail sector. In addition the latest quarterly GDP release showed the UK economy expanding by an above expectation 0.5%, driven by a strong showing from the dominant services sector.

The positive economic skyline is still however clouded by the ongoing Brexit negotiations with both sides readying themselves for formal trade talks in late March.Currently both sides have reined back their rhetoric, realizing that post-Brexit trade arrangements are mutually beneficial moving forward.

Looking at GBP/USD, the recent rally has been fueled by both currencies with a strong British Pound and a weak US dollar combining to send the pair back to highs last seen in June 2016. The US dollar was weakened on renewed fears over trade wars – the US recently hit imported solar panels and washing machines with tariffs – while US President Trump recently spoke again about ‘America First’ at the World Economic Forum in Davos.

GBP/USD recently touched 1.43500 and is likely to trade back to, and above, this level in the near future. While positive tailwinds remain we would advise not to go chasing set ups, preferring instead to look at any setbacks as an opportunity to enter a trade. The January 25 low of 1.40850 is likely to hold, although a small gap is open down to 1.40500 on the four hour chart, and this area should present Sterling bulls with a reasonable point of entry, all else being equal. The stochastic indicator is also still positive and pointing higher.