GBP: Perhaps Not Ready Yet For Assault on $1.40 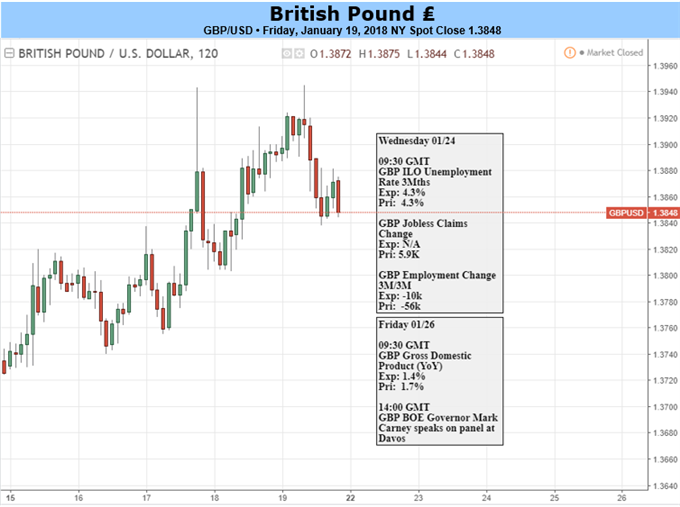 Find Out Here What the First Quarter May Hold for GBP, Equities, Oil and Other Key Markets

GBPUSD continues to advance but price action on Friday was interesting: the pair fell on weaker than expected UK retail sales figures, stabilized and then dropped back further. At its high point of the day it was at 1.3945, its strongest level since the day after the UK referendum vote to leave the EU in June 2016, but it was unable to hold on.

This suggests that resistance is now solid at the 1.40 level and it would be no surprise to see a correction, though a spell of sideways trading seems more likely.

While a weak US Dollar and the rising prospects of an agreed Brexit deal have been largely responsible for the Pound’s advance, the week ahead will likely be dominated by UK economic data. In particular, Tuesday’s figures for unemployment and average earnings will be important even though both will likely be little changed: the unemployment rate staying at 4.3% and the increase in average earnings at 2.5%.

The latter is particularly significant as earnings growth remains below the inflation rate and this continues to curb spending and therefore the consumption component of economic growth. That should become even more evident Friday, when the “advance” fourth-quarter readings for GDP are released. Quarter/quarter a same-again 0.4% growth figure is possible but that would still lower the year/year rate of expansion to a rather weak 1.4% from the previous 1.7%.

Data aside, Bank of England Governor Mark Carney is scheduled to speak at a panel meeting at the World Economic Forum in Davosbut is unlikely to say anything market moving. The Bank has indicated that any further interest rate increases after November’s quarter-point hike will be “limited and gradual” – widely interpreted as meaning the next rise will come late this year.

However, two more this year cannot be completely ruled out, with the first perhaps coming in May.