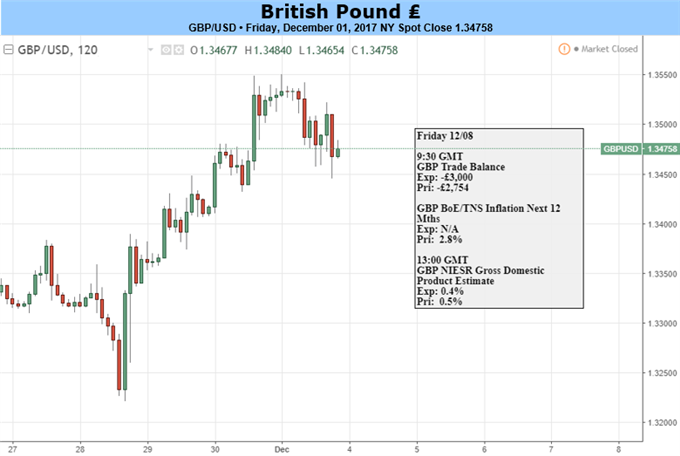 GBP Continued Upside On The Cards

We remain neutral on GBP/USD with a lot of the recent positive news, both economic and political already priced into the pair. Any sell-off however would offer an opportunity to go long GBP on a medium- to long-term basis where we see GBP returning to pre-referendum levels. As it is, a close above 1.36500 would see cable at an 18-month high and back to the June 20, 2016 candle which had a one-day range of 1.3250 – 1.5000.

The latest rally has been fueled by positive sounds coming from both the UK and EU Brexit negotiating teams with the ‘divorce bill’ seemingly agreed, although the final figure will not be known for some time. EU and UK citizen’s rights are also close to being signed off, leaving just the N.Ireland border issue to be solved before talks can progress to the second phase.

Ahead, the US Federal Reserve is expected to raise interest rates by another 0.25% at the December 12-13 meeting although this hike is fully-priced in and is not expected to move the pair a great deal. The pair would move sharply higher however if the US failed to raise rates, although this is a very long-shot.

On the charts, GBP/USD remains in a bullish pattern, comfortably trading above the 100-day ema, while the stochastic indicator remains firmly in positive territory. A close above the September 20 high of 1.36600 would give the pair further reason to move even higher.

You can check out our latest Q4 trading forecast for Sterling here.