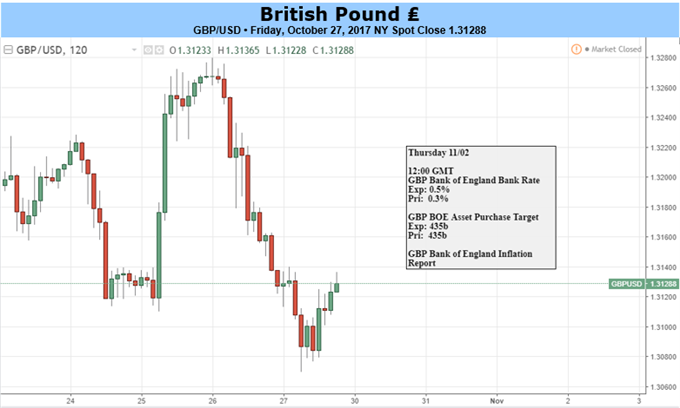 The Bank of England will almost certainly double the benchmark UK Bank Rate to 0.5% on “Super Thursday”, increasing it for the first time in more than a decade. However, with the markets pricing in a probability of around 88% of a hike, there is a risk that the British Pound will fall back on the news, just as the Euro fell after the European Central Bank announced the predicted tightening of Euro-Zone monetary policy in the past week.

Super Thursday, November 2, will see not just the announcement from the central bank’s monetary policy committee but also the minutes of its meeting and the publication of the BoE’s quarterly Inflation Report, all at 1200 GMT. Several points will be worth watching.

First, the decision may well not be unanimous, with perhaps as many as three of the nine MPC members voting for the status quo. That would suggest that expectations among some economists of several further rate increases next year might have to be scaled back. By contrast, if the Inflation Report shows the Bank has nudged higher its economic growth forecasts and/or raised its predictions for inflation that would make further rate hikes more likely.

Both are possible given that the latest GDP growth figures topped estimates while the recent strength of oil prices should give at least a temporary boost to CPI inflation. Note though that no change is expected in either the bank’s £435 billion government bond buying or its £10 billion corporate bond purchases.

Then, at 1230 GMT, attention will turn to the press conference by Bank of England Governor Mark Carney for his views on what might happen to monetary policy next year. If he follows the lead of European Central Bank President Mario Draghi and adopts a dovish tone, the Pound could suffer as the Euro did.

Meanwhile, IHS Markit will publish its purchasing managers’ index for the UK manufacturing sector the day before, with analysts predicting a small increase to 56.0 in October from 55.9 the month before. The construction PMI will also have been published before the BoE announcement, with predictions centring on a dip to 48.0 from 48.1. If either of those figures are out of line, forecasts for the BoE will be adjusted accordingly. The services PMI is also expected to ease, to 53.3 from 53.6, but will be released on Friday so will have less impact.

As for the British Pound, that fell against the US Dollar on Thursday and Friday while climbing against the weak Euro. It could ease against both in the week ahead.