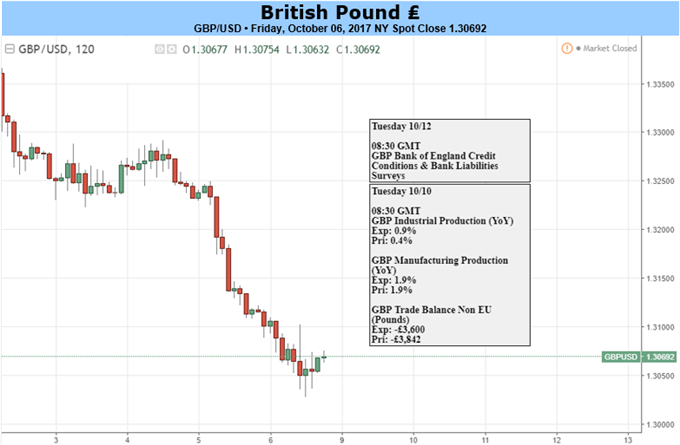 GBP/USD is continuing to slide and it’s hard to see an end to its current weakness. Rebel members of her ruling Conservative Party are challenging UK Prime Minister Theresa May’s leadership; the fifth round of Brexit talks begins in Brussels Monday with the two sides as far apart as ever; the economic data have been weak; and the pair has broken down through several key support levels on the chart.

That all suggest further depreciation to come, particularly as the US Dollar remains strong. However, as the chart below shows, GBP/USD is approaching oversold territory, sending out a warning signal.

So what could cause a correction? First, the attempt to force out May and choose a successor appears to have failed, with the rebels unable to gain enough support from other Members of Parliament, and that has boosted her authority, at least for now. As for Brexit, there is always the chance of a breakthrough, unlikely though that seems currently.

Then there’s the economic data. In the past week, purchasing managers’ indexes for the UK construction and manufacturing sectors in September were both weaker than expected. However, the PMIs are seen as “soft” data and the week to come sees “hard” – or official – data on industrial production, manufacturing output and trade. If they turn out stronger than predicted, that could revive forecasts, which are already high, that a UK interest rate increase is just around the corner.

It has to be said, though, that this all seems rather unlikely and the more probable outcome is a further slide in GBP/USD, particularly if there are any hints from the Bank of England that now may not be the right time to raise rates after all. Note too that IG Client Sentiment data are currently sending out a bearish signal.