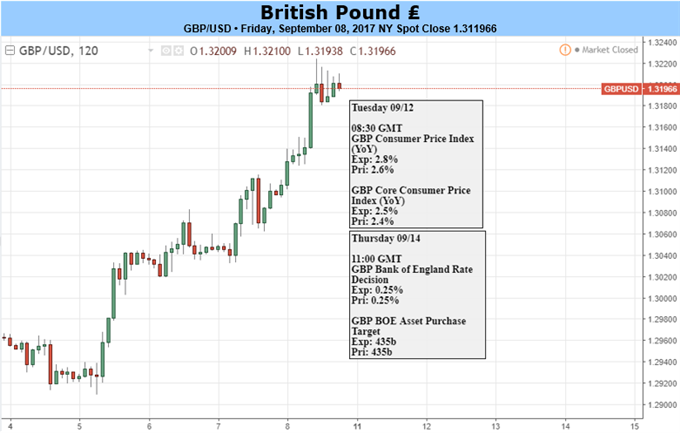 The British Pound recovered strongly against a weak US Dollar last week and there’s little to suggest that its climb is running out of steam. While the persistent weakness of the UK economy means little or no chance of higher UK interest rates for the foreseeable future, despite above-target inflation, the chances of a near-term rate rise in the US are falling – taking away the Dollar’s advantage.

Both the UK’s economic weakness and its high inflation rate will likely be in focus in the week ahead. The claimant count measure of UK unemployment is widely expected to have risen in August after falling in July, although the unemployment rate is at a lowly 4.4%.

Against this background, Thursday’s meeting of the Bank of England’s monetary policy committee will almost certainly end with bank rate left at 0.25%, government bond buying at £435 billion and corporate bond buying at £10 billion. Once more, only two members of the MPC are likely to have voted for a rate rise.

For GBP/USD, this will likely mean a test of the 1.3267 high for the year, reached on August 3, despite the almost comical squabbling between UK and EU officials over Brexit. A short squeeze higher in the Dollar after its widespread recent losses is always a possibility but it’s notable that IG Client Sentiment data are still sending a bullish signal for GBP/USD, with only 30% of retail traders long compared with 70% short.

Against other major currencies such as the Euro and the Japanese Yen, a period of relative stability for the Pound is likely. Both have benefited from the “risk off” tone in the markets caused by a combination of North Korea’s missile tests, Hurricane Irma and the Mexican earthquake, so the Pound could struggle to make further gains against them.