GBP: Another Difficult Week Coming Up 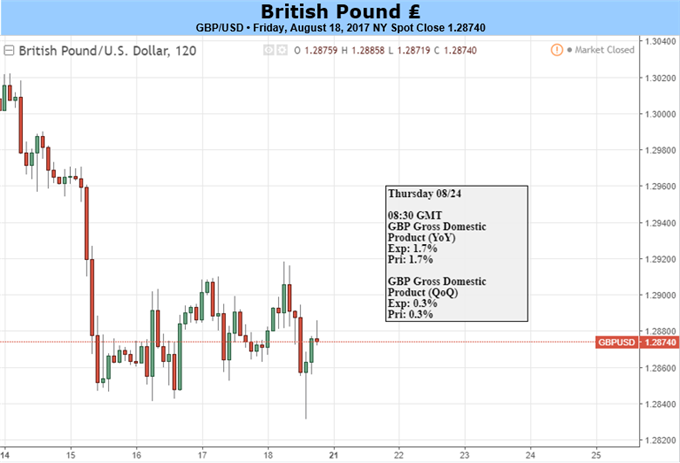 Check out our GBP Trading Guide: it’s free and has been updated for the third quarter of 2017

With the British Pound trending lower against the US Dollar, Euro and Japanese Yen throughout the month of August so far, buying the currency is currently only for the brave. While corrections and consolidation are perfectly possible, further weakness will likely continue longer-term

Against the Dollar, for example, the Pound has retreated from a high of 1.3268 on August 3 to 1.2857 in late European business Friday. At that level it is below its 20-day, 50-day and 100-day moving averages, but is not yet oversold judging by the 14-day Relative Strength Index.

Technicals aside, there was a mixed bag of data last week. The headline rate of inflation was unchanged at 2.6% in July whereas a small uptick to 2.7% had been expected. Average earnings grew by more than predicted, taking some of the pressure of the hard-pressed consumer, and retail sales grew by more than expected on a month/month basis though they were lower than predicted year/year.

The overall impact on the currency was minimal, and there was also little response to the UK Government’s latest Brexit position papers on subjects like the border between Northern Ireland, which is part of the UK, and the Republic of Ireland, which will remain an EU member. While important, these papers are not seen as market-moving.

In the coming week, the key statistic will be the second reading of second-quarter GDP, which analysts will be watching for any deviation from the first estimates of 0.3% growth quarter/quarter and 1.7% year/year. Also on the calendar are the public finances on Monday and the Confederation of British Industry’s industrial and retail surveys on Tuesday and Thursday respectively.

Unlike Janet Yellen and Mario Draghi, Bank of England Governor Mark Carney will not be attending the Jackson Hole symposium and while his deputy Ben Broadbent will be there he will not be speaking. There is likely, therefore, to be little further guidance this week on the course of UK monetary policy in the months ahead.