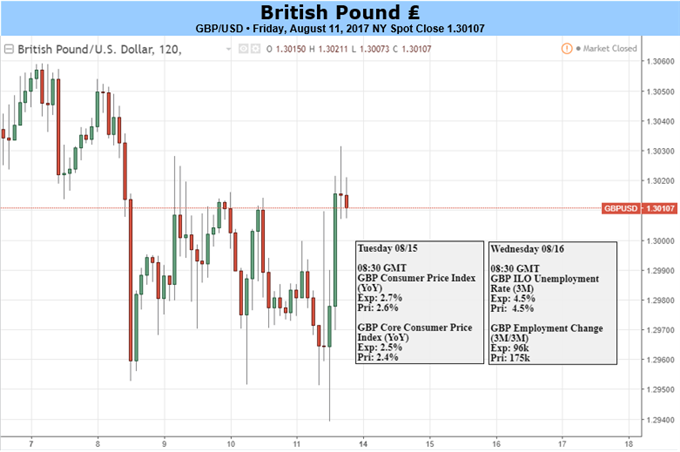 Looking for a longer-term forecast for GBP? Check out our new Trading Guides: they’re free and have been updated for the third quarter of 2017

The British Pound is often seen, like the US Dollar and the Euro, as neither a safe-haven currency to be bought when investors are nervous nor a ‘risk-on’ currency to be acquired when their risk appetite increases. However, this broad generalization, like most, needs to be questioned.

The US Dollar, for example, is sometimes used as a haven. The British Pound, for now at least, is trading like a currency investors will shun if the dispute between North Korea and the US continues to dominate the markets. Against the Australian Dollar, for example, it barely budged last week even though the AUD is seen as a typical ‘risk-on’ currency.

By contrast, it weakened against both the Swiss Franc and the Japanese Yen; the two currency bolt-holes of choice, along with gold, US Treasuries and German Bunds.

The clear implication is that if you think the dominant market theme in the current week will continue to be the megaphone diplomacy between Donald Trump and Kim Jong-un, the British Pound could fare badly. Moreover, it’s a big week for UK data and any more signs of economic weakness could further undermine it by pushing a tightening of monetary policy even further into the future.

Economists are looking for headline inflation to increase only modestly in July to 2.7% year/year from 2.6% and for retail sales growth to have slowed markedly, while the unemployment rate and wages growth remain stable. If inflation comes in lower than expected, or the labor-market figures are disappointing, the Pound could suffer accordingly.

As for Brexit, little is happening right now as many UK politicians remain on holiday. Note, though, that Michael Saunders, one of the two hawks on the Bank of England’s monetary policy committee currently voting for a rate rise, was reported Friday as saying that the UK’s exit from the EU meant the economy would probably grow more slowly in the coming years than it would otherwise have done.

Against this background, the risks for the Pound seem more to the downside than the upside.

If you’re interested in the influence of sentiment on market trading, listen in to my webinar at 1000 GMT Monday