British Pound Falls Down After a Reiteration of BoE Dovishness 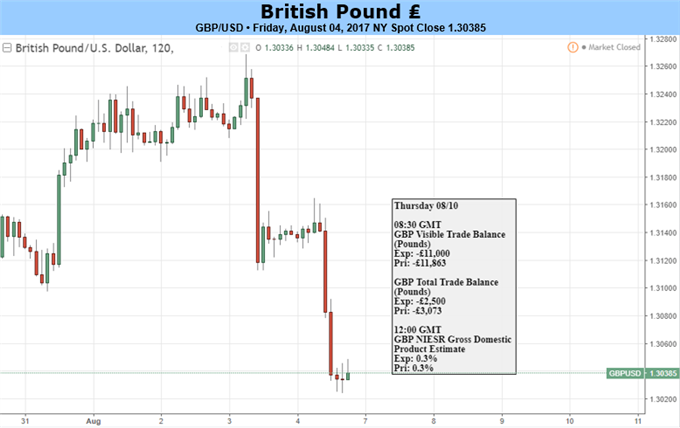 The big item from this week for the British Pound was the Bank of England’s rate decision on Thursday. This was a quarterly meeting, often referred to as ‘Super Thursday’ as the BoE accompanied the rate decision with a set of updated forecasts as well as meeting minutes and a press conference after the decision. It was probably no surprise to many that BoE Governor Mark Carney remained dovish, as has become usual in the post-Brexit backdrop.

But Thursday’s meeting wasn’t so cut and dry: While Mr. Carney did remain dovish and rather pessimistic for the economy’s prospects around Brexit, the BoE did indicate that rate hikes may be on the horizon. Within the meeting minutes, the BoE said: “If the economy were to follow a path broadly consistent with the August central projection, then monetary policy could need to be tightened by a somewhat greater extent over the forecast period than the path implied by the yield curve underlying August projections’.

This doesn’t sound overtly-dovish: Instead, it sounds like a Central Bank that’s preparing to hike rates in an effort to ward off inflation if price increases continue above the BoE’s forecasted levels. As Mr. Carney had shared, the type of inflation currently being seen in the U.K. isn’t the type of inflation that Central Banks have been looking for since the Global Financial Collapse. The inflation being seen currently is largely noticeable in asset prices, and imports – meaning that British consumers are paying more, but incomes aren’t rising as fast to keep up with these elevated prices. So far in 2017, consumer credit levels have shot-higher to offset this differential, but this isn’t really an affable long-term solution that should get economists excited about forward-looking growth prospects. In turn, the BoE downgraded GDP growth estimates for the next two years, now looking for 1.7% growth in 2017 (from a previous 1.9%) and 1.6% growth in 2018 (from a previous 1.7%).

This means that likely even more focus will be paid towards U.K. inflation prints in the months ahead, and should inflation show above the 3% marker that is towards the top-end of the BoE’s expectations, we could see another burst of strength in Sterling as markets try to get in front of any possible policy tightening that may follow. One thing is certain from yesterday’s meeting: The Bank of England is not optimistic for the business environment as the U.K. government wades through Brexit negotiations. But taken from Mr. Carney’s commentary yesterday combined with the prospect of rate hikes contained within the minutes, the BoE appears as though they won’t be caught too far behind the curve (pun intended) if inflation does remain elevated.

For the week ahead, the calendar is rather light on U.K. economic data. The highlight will likely be on Thursday, when we receive a batch of data points that could bring some volatility into GBP. Industrial and manufacturing production numbers are released earlier in the day, followed by NIESR GDP estimates for the month of July a bit later. Given that growth forecasts were recently downgraded, any topline beats here could bring on a quick iteration of strength to the British Pound.

The bigger picture and perhaps more pertinent theme here, however, appears to be on the basis of the BoE’s tolerance to inflation. While GBP/USD remains elevated above the 1.3000 level and had come into yesterday’s Super Thursday with an element of strength - a large portion of this year’s bullish move in Cable is likely resultant of the jaw-dropping weakness that’s developed in the Dollar. Against the Euro or even the Japanese Yen, price action structure looks considerably more subdued as GBP bulls in each market have been more than offset by strength in the Euro or more recently, the Yen. Case in point: EUR/GBP remains above the key psychological level of .9000 after the pair set a fresh nine-month high in the wake of yesterday’s BoE announcement.

The forecast for GBP for next week will be held at neutral. Until more information avails itself on the inflationary front, it can be difficult to prognosticate any extended runs of strength in GBP; and on the other side of the trade, the BoE remains at ‘pedal to the floor’ levels of accommodation, and there is likely little more that will be done on that front without a material deterioration of inflationary forces within the British economy.