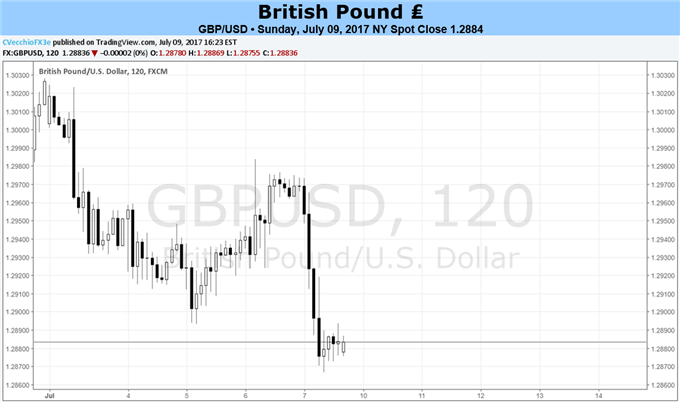 - The British Pound was one of the weaker currencies last week, hurt by weaker PMI and trade data.

- The retail crowd remains net-short GBP/USD, but short positioning has shrunk significantly over the past week suggesting a turn may be nearing.

- See our Q3’17 GBP/USD forecast at the start of the new quarter.

The British Pound was one of the weaker performers in the FX space last week, losing ground to five of the seven major currencies as the calendar turned into the second half of the year. GBP/CAD was the worst performing GBP-cross, losing -1.74%, while GBP/JPY was the best performing GBP-cross, gaining +0.31%. With a lighter economic docket in the days ahead, focus will likely remain on the reemergence of weak economic data that emerged last week.

Despite the recent turn in rhetoric from Bank of England policy officials at the end of June, the overbearing trend of weakness among major data releases in the past few days has soured the mood around the British Pound. PMI figures for June missed to the downside suggesting a slower rate of GDP growth than previously expected. Likewise, industrial and manufacturing production figures for May, in conjunction with a deterioration in the trade balance for May, provided “hard data” to back-up the deterioration in the “soft data” PMI figures. As a result, the UK Citi Economic Surprise Index, which measures economic data momentum for the UK economy, fell to -35.1 by July 7, its lowest level of 2017 and lowest overall since June 2016.

Although BOE policymakers have issued concern over inflation, market and financial conditions aren’t supportive of their anxiety. Brent Oil prices have declined -18.2% since the first week of 2017, and during this time, the 5-year, 5-year inflation swap forwards, a market measure of medium-term inflation expectations, have declined from 3.615% to 3.346%.

Ultimately, given that the statistical base effect of the June 2016 Brexit vote has now washed away and the British Pound is no longer down in the neighborhood of -15% to -20% year-over-year, inflation may no longer have the strong tailwind it has enjoyed for the past several months. Likewise, weakness in oil prices suggests that another important driver of the first half swing higher in inflation readings across developed economies has fizzled out.

The stretch of data weakness likewise has caused interest rate expectations for a Bank of England rate hike to recede, which contributed to the underperformance by the British Pound. At market close on June 30, overnight index swaps were pricing in a 54% chance of a 25-bps rate hike by the end of 2017; by market close on July 7, OIS were pricing in a 50% chance. Additional deterioration in economic data momentum could cause odds to drop further, which would weigh on the British Pound.

The days ahead offer few drivers for the British Pound which may keep the focus on recent data deterioration. Two speeches on Tuesday could disrupt the negativity, assuming BOE Chief Economist Andy Haldane parrots a similar tone to his hawkish remarks at the end of June that helped lift the British Pound. Otherwise, jobs data for May and June on Wednesday mark the only releases that will warrant any attention over the week, though it seems that even they will not meet the bar of being considered a ‘game changer’ by any means.