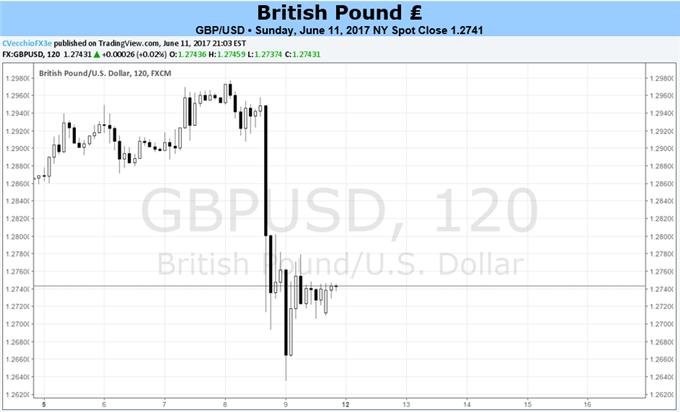 - UK election outcome greatly complicates the Brexit negotiations, which are inevitably poised to be looked at in the “hard landing” outcome once again.

- Political risk premium in the UK should remain elevated for the foreseeable future as another general election can’t be ruled out.

- The retail crowd is hanging onto its net-short GBP/USD position, even after the downswing around the election.

The British Pound was the clear loser last week, dropping across the board and more than -2% in some cases, as the results of the UK general election shocked financial market participants. Despite having a clear majority in parliament, UK Prime Minister Theresa May’s decision to hold a snap election will be panned and criticized now that the Tories have fallen below the 326 seat threshold in order to have an outright majority.

With now having 318 seats in parliament, the Tories’ hold on power is starting to slip. This is bad news for the British Pound. Pre-election, the hope was that a wider majority in parliament would allow Theresa May to push for a “soft Brexit” as she would be able to ‘afford’ losing the support of right-wing Brexiteers and still get legislation pass through the House of Commons. The reality of the situation is quite different. Now that a hung parliament will exist with the Tories holding onto a slim majority overall, and only a governing capability under an alliance with Northern Ireland’s DUP, political stability is very much in question. Don’t be surprised if after a few months of strenuous leadership, the Tory-DUP alliance breaks down and voters head to the polls for another general election.

Now that a “hard Brexit” outcome will likely be speculated over, the Sterling’s uptrend originating in mid-April is very much in question. If history is any guide, then the hung parliament outcome of the May 2010 general election may serve as a guidepost for what to expect: British Pound weakness immediately; and over the next month. GBP/USD could trade lower towards 1.2500 again while EUR/GBP could rally above 0.9000.

The week ahead offers plenty of market moving data and events that an already-volatile British Pound will run into. The May UK Consumer Price Index release on Tuesday should help set the table for Thursday’s Bank of England policy meeting. Similarly, wage growth and labor data due out on Wednesday will serve as an appetizer for the Thursday rate decision. A weak series of data this week would come at a time when the British Pound is already pre-disposed for more downside.

See how our Q2’17 British Pound forecast is holding up so far - check out the DailyFX Trading Guides.