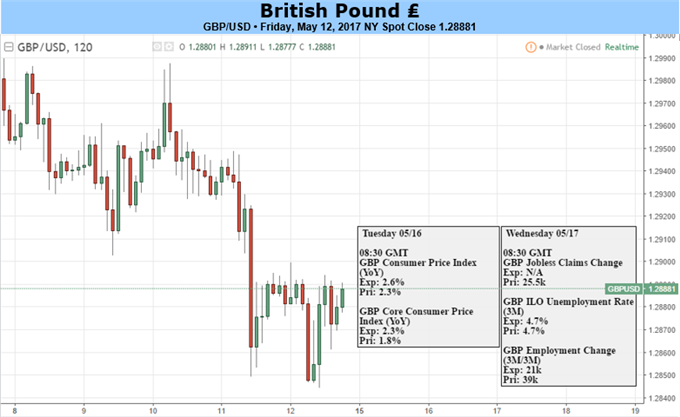 British Pound: Due For a Deeper Correction Lower

Data on the UK economy released last Thursday were uniformly weak, with industrial production, manufacturing output, trade and construction figures all coming in lower than economists had predicted. In addition, the Bank of England said the same day that it may need to raise interest rates before late 2019 – positive for the British Pound in theory but actually negative because many market participants were expecting an increase before then.

The near-term outlook for GBP is therefore none too rosy, with politics also a concern. Ahead of the general election on June 8, Prime Minister Theresa May’s market-friendly ruling Conservatives have a large lead in the polls, with the latest from YouGov for The Times newspaper showing them ahead of the opposition Labour Party by a thumping 16 percentage points. However, that could easily be reduced as the election approaches, prompting market jitters.

Brexit also remains in the background, with the potential to blow up at any time if one side or the other makes an ill-timed comment.

As for the future, the week ahead is packed with important data releases, including the consumer and producer price indexes on Tuesday, unemployment and earnings on Wednesday, retail sales on Thursday and the Confederation of British Industry’s industrial trends survey on Friday.

This could all potentially weaken the Pound, which has had a good run of late, despite some weakness over the last few days, and could be due for a deeper correction.

What will drive the British Pound and all other currency majors in 2017’s second half? Check out the freeDailyFX Quarterly Forecasts