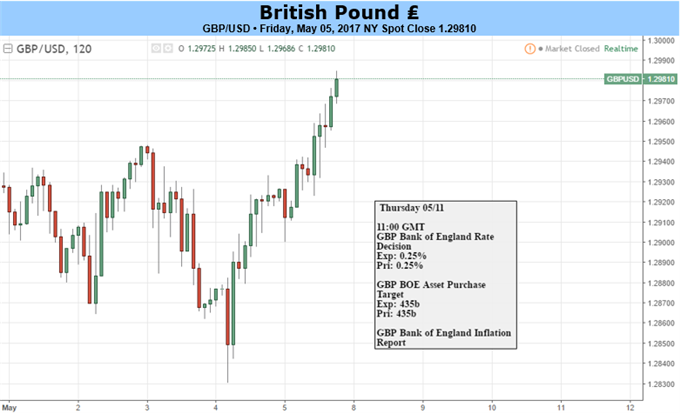 The Bank of England’s (BoE) interest rate decision on May 11 takes center stage as the central bank also presents its updated quarterly inflation report, and the fresh developments may fuel the relief rally in the GBP/USD exchange rate should a growing number of officials show an increased willingness to normalize monetary policy.

Even though the Monetary Policy Committee (MPC) is widely expected to keep the benchmark interest rate at the record-low of 0.25%, a greater dissent may take shape as the headline reading for U.K. price growth starts to climb above the central bank’s 2% target. Heightening price pressures may push BoE board member Ian McCafferty to once again join Kristin Forbesand vote for a 25bp rate-hike, while Michael Saunders appears to be moving away from the wait-and-see approach as the official now argues ‘a modest rise in rates would still imply that considerable stimulus remains in place, helping to support output and jobs.’ However, the uncertainty posed by ‘Brexit’ may generate another 8 to 1 split, with the British Pound at risk of facing a bearish scenario should the central bank merely attempt to buy time. In turn, more of the same from the BoE interest rate decision may ultimately curb the relief rally in GBP/USD amid the deviating paths for monetary policy.

With that said, market participants may pay increased attention to the slew of Fed speeches on tap for week ahead as a bulk of the 2017-voting members (Minneapolis Fed President Neel Kashkari, Dallas Fed President Robert Kaplan, New York Fed President William Dudley, Chicago Fed President Charles Evans and Philadelphia Fed President Patrick Harker) take to the wires. With Fed Fund Futures now pricing nearly an 80% probability for a June rate-hike, officials may increase their efforts to prepare U.S. households and businesses for higher borrowing-costs, and a slew of hawkish commentary accompanied by a more detailed exit strategy may tame the resilience in Cable especially as the Federal Open Market Committee (FOMC) beings a broader discussions in unwinding the balance sheet. 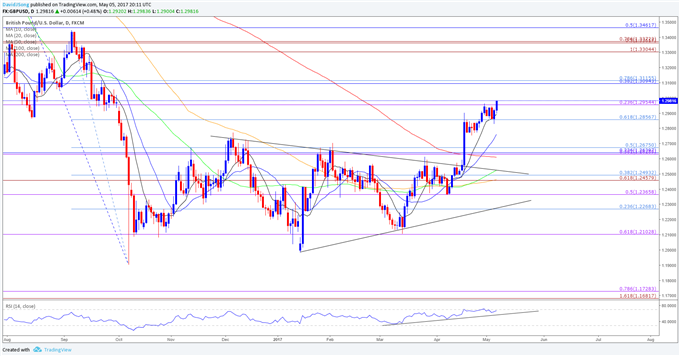 Nevertheless, the near-term outlook for GBP/USD remains tilted to the topside ahead of the BoE’s ‘Super Thursday’ event as the pair breaks out of a narrow range, with price & the Relative Strength Index (RSI) largely preserving the bullish trends from earlier this year. The next topside hurdle comes in around 1.3090 (38.2% retracement) to 1.3120 (78.6% retracement), but keep in mind that the RSI struggles to push into overbought territory even as the exchange climbs to fresh monthly highs. If the divergence persists, the momentum indictor may generate a bearish trigger on a break of trendline support, with the first downside area of interest coming in around 1.2630 (38.2% expansion) to 1.2680 (50% retracement). Check Out the Quarterly DailyFX Forecasts for Additional Trading Ideas