Are Early Elections Really a ’Game-Changer’ for the British Pound? 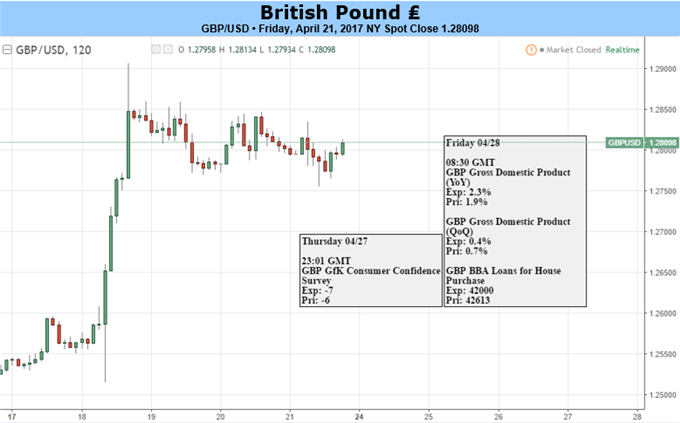 The big news out of the U.K. this week came on Tuesday morning from Prime Minister Theresa May, in which she surprised the world by announcing that general elections will be held early, on June the 8th. The move was widely-applauded as astute political strategy from PM May, as she could use this opportunity to cauterize additional support for her Conservative party ahead of Brexit negotiations. Most opinion polls indicate that these snap elections could allow Tories a greater share of Parliament; and that could embolden the nation’s negotiating position when starting Brexit negotiations with the European Union.

The near-immediate impact of Tuesday’s announcement was a gust of strength in the British Pound, pretty much across-the-board. In Cable, the pair finally broke-above resistance that had set in after the ‘flash crash’ in October at the 1.2775 level; EUR/GBP ran down to the key support zone around .8300 that’s held in the pair since the spike from the Brexit referendum, and even GBP/JPY reversed a string of losses (breaking above a trend-line) that had plagued that market since the December rate hike out from the Federal Reserve. In very short order, many were claiming that PM May’s announcement was a ‘game changer’ for the British Pound and, in-turn, the U.K.

More likely, however, would be that these rapid price gains were elicited from short-covering as yet another dash of uncertainty entered the picture. Investors generally eschew uncertainty by limiting risk: Given the brisk declines in GBP in the post-Brexit environment, this would allude to a fairly-sizable net short position in the market. To close short positions, investors need to buy to cover; and this can create a strong move-higher as new ‘news’ gets priced-in to a heavily-shorted market. As prices run-higher, currently-held short positions are ‘squeezed’ further as those higher prices cutting into equity, creating even more impetus to buy (to cover), thereby creating even-more strength.

The bigger question here is one of continuation potential: Might this week’s burst-higher in GBP lead to something bigger or longer-term? Or, to put it otherwise, is this week’s announcement a legitimate ‘game-changer’ type of event for the British Pound? And the answer to that question should be derived from whether or not one thinks that early elections will create any additional hawkishness at the Bank of England, as the BoE has been the predominant driver of GBP even-before the referendum. And considering the fact that a greater Tory majority would simply give the U.K. a stronger hand at pushing for a ‘Hard Brexit’ scenario, it might be difficult to imagine how early elections and a greater potential for ‘Hard Brexit’ could create additional hawkishness at the BoE.

As we’ve been discussing for the past six months, there is a recipe for higher prices brewing in the British Pound: But that would likely come from stronger inflation resultant from the ‘sharp repricing’ in the value of GBP post-Brexit. As importers adjust prices-higher to protect margins by offsetting those out-sized losses in GBP-cross rates, inflationary pressure increases until, eventually, the BoE is forced away from their dovish policy outlay. Once this happens, the British Pound could be free-to-fly as the simple act of the Bank getting ‘less accommodative’ in response to stronger inflation could lead to expectations for the eventual tightening of monetary policy with, perhaps even a rate hike in the not-too-distant future; just as Ms. Kristin Forbes had opined at the BoE’s last rate decision.

But is more political uncertainty really going to directly compel the BoE to get less dovish? This is the same bank that kicked-in a bazooka of stimulus simply because they feared that Brexit might create a slowdown that, frankly, hasn’t yet shown up. We’ve heard as much from the BoE’s own Chief Economist, Mr. Andy Haldane; and even as the bank comes to the realization that they’re slowdown scenarios around the risks of Brexit have been terribly incorrect, there’s been an apparent reticence to remove the massive accommodation that’s already been set forth.

The big item on the economic calendar for the U.K. next week is GDP set to be released on Friday morning. The expectation is for 1.9% annualized growth, and this could produce a direct relationship with price action where beats bring on higher prices while a miss elicits selling. More opportunistic for GBP-volatility will be the next Bank of England Super Thursday event on May 12th. This is when the Bank will publish updated inflation forecasts and this is when markets can get a better pulse on just how concerned the bank might be on the topic of rising inflationary forces. There is scant expectation for any movement in rates at that meeting; but given that the last BoE rate decision produced the first vote for a rate hike post-Brexit, the point of interest will be in the details to see as to whether or not any other members of the MPC are growing more comfortable with the idea of tighter policy options in the near-term.

Until this recent bullish move is confirmed by follow-thru price action, or by a deeper shift within the Bank of England away from the current dovish policy outlay, the forecast for GBP will be held at neutral.