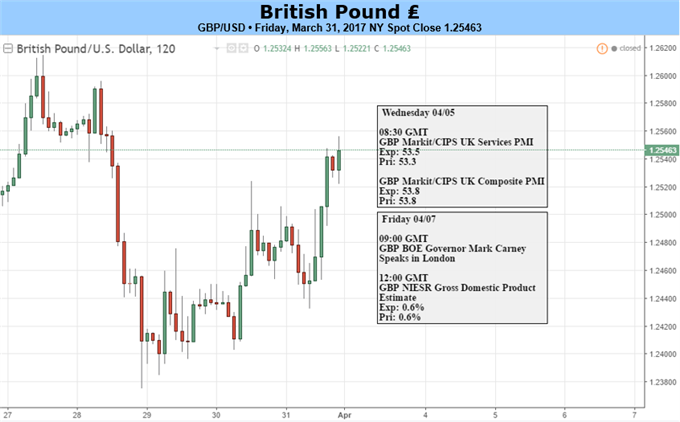 Despite all the anticipation surrounding ‘Brexit,’ the British Pound is little changed even as the U.K. officially triggers Article 50 of the Lisbon Treaty, and GBP/USD may continue to operate within the range from earlier this year as both the Bank of England (BoE) and the Federal Reserve are expected to retain their current policies for the foreseeable future.

Following the 8 to 1 split in March, the recent data prints coming out of the U.K. economy may spur a growing dissent within the Monetary Policy Committee (MPC) as the headline reading for U.K. price growth exceeds the 2% target for the first time since 2013. In turn, the BoE may show a greater willingness to move away from its easing cycle especially as officials persistently warn ‘there are limits to the extent that above-target inflation can be tolerate.’ However, the rift may be short-lived as Kristin Forbes is scheduled to depart from the central bank at the end of June.

Indeed, board member Ian McCafferty appeared to be taming interest rate expectations earlier this week, with the official largely emphasizing that the MPC will raise the benchmark interest rate when it becomes appropriate, and the majority may continue to endorse a wait-and-see approach as the central bank argues ‘monetary policy can respond, in either direction.’ As a result, Governor Mark Carney and Co. may make further attempts to buy more time as the decoupling from the European Union (EU) clouds the economic outlook for the U.K., and the lack of urgency to remove the highly accommodative policy stance may continue to cast a long-term bearish outlook for GBP/USD as the Federal Reserve appears to be on course to implement higher borrowing-costs over the coming months.

Market participants may pay increased attention to the key developments coming out of the U.S. as another slew of Fed officials (New York Fed President William Dudley, Philadelphia Fed President Patrick Harker, Fed Governor Daniel Tarullo) are scheduled to speak throughout the first full-week of April, while U.S. Non-Farm Payrolls (NFP) are projected to increase another 175L in March. Recent comments from Fed Vice-Chair Stanley Fischer suggests the central bank remains on course to implement three or four rate-hikes in 2017 despite the uncertainty surrounding fiscal policy, and a batch of hawkish central bank rhetoric paired with a further improvement in the labor market dynamics may heighten the appeal of the greenback as it puts increased pressure on the FOMC to raise the federal funds rate sooner rather than later. 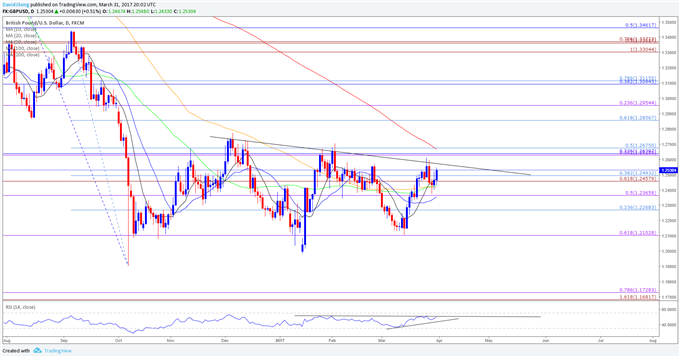 With that said, the limited reaction to Brexit may stoke a larger rebound in GBP/USD as the pair extends the recent series of higher highs & lows, but the failed attempts to break above the Fibonacci overlap around 1.2630 (38.2% expansion) to 1.2680 (50% retracement) keeps the broader outlook tilted to the downside especially as GBP/USD preserves the bearish trend carried over from late-2016. In turn, the pound-dollar exchange rate may continue consolidate within the range from earlier this year should the pair struggle to mark a meaningful test of the March high (1.2615) over the coming week.