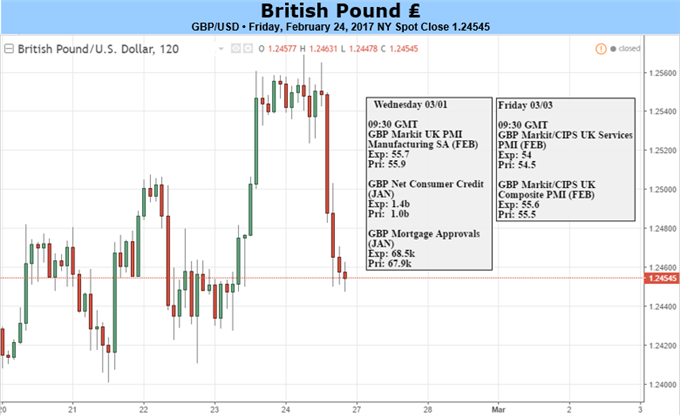 The broader outlook for the British Pound remains tilted to the downside with the U.K. on course to trigger Article 50 in March. In turn GBP/USD stands at risk of giving back the rebound from earlier this year - especially as the Federal Reserve shows a greater willingness to raise the benchmark interest rate over the coming months.

Even though U.K. Mortgage Approvals are projected to pick up in January, the print may generate a limited market reaction as the House of Lords holds a detailed review of the ‘Brexit’ bill, which would authorize Prime Minister Theresa May to begin the procedure of withdrawing from the European Union (EU). Threats of losing access to the EU’s single-market may produce another round of headwinds for sterling as it impedes on the Bank of England’s (BoE) ability to tame the risk for ‘inflation overshoot,’ and Governor Mark Carney and Co. may come under pressure to further support the real economy as officials argue ‘monetary policy can respond, in either direction, to changes to the economic outlook as they unfold to ensure a sustainable return of inflation to the 2% target.’ With that said, the BoE’s wait-and-see approach may continue to prop up the British Pound as the central bank drops it dovish tone, but the bearish sentiment surrounding the British Pound may gather pace over the coming months as the U.K.’s departure from the U.K. dampens the long-term prospects for sustainable growth.

Indeed, the stickiness in the pound-dollar exchange rate may start unravel over the coming days should the batch of key U.S. data prints boost interest-rate expectations. A rebound in U.S. Durable Goods Orders accompanied by an upward revision in the 4Q Gross Domestic Product (GDP) report may encourage the Federal Open Market Committee (FOMC) to adopt a more hawkish tone at the next interest rate decision on March 15, and the slew of fresh speeches from the group of 2017 voting-members (Dallas Fed President Robert Kaplan, Philadelphia Fed President Patrick Harker, Fed Governor Lael Brainard, Fed Governor Jerome Powell, Fed Vice-Chair Stanley Fischer and Chair Janet Yellen) may heighten the appeal of the greenback should a growing number of central bank officials show a greater willingness to further normalize monetary policy ‘sooner rather than later.’ Even though the FOMC Minutes failed to boost bets for a March rate-hike, Fed Fund Futures continue to price a greater than 60% probability for a move in June, and the deviating paths for monetary policy continues to instill a long-term bearish forecast for GBP/USD especially as the BoE keeps the door open to further embark on its easing-cycle. 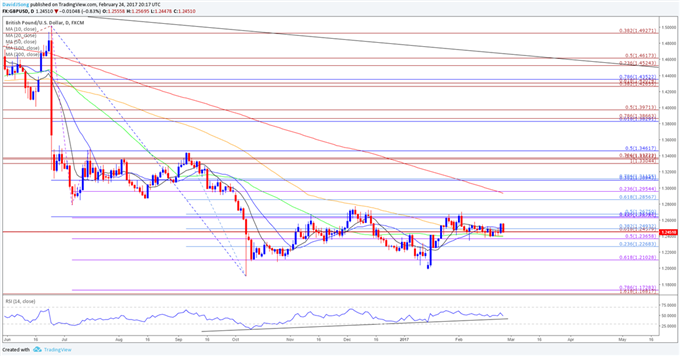 As a result, hawkish Fed rhetoric paired with a series of positive U.S. data prints may weigh on GBP/USD should the key event risks shift market expectations and fuel bets for a March rate-hike. A break/close below near-term support around 1.2270 (23.6% Fibonacci retracement) would shift the near-term bias to the downside, with the next region of interest coming in around 1.2100 (61.8% expansion). - DS