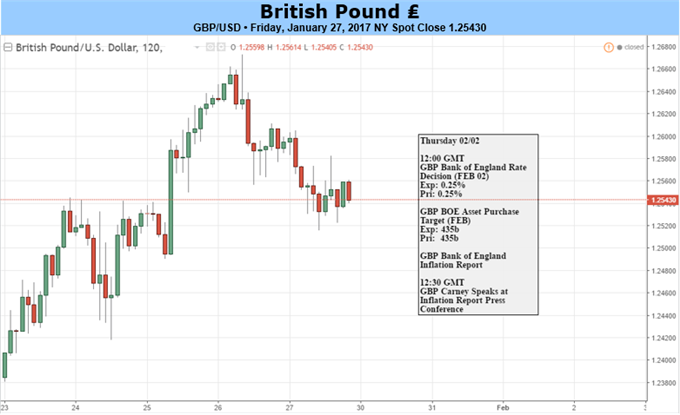 The Federal Reserve’s first interest rate decision for 2017 may generate limited interest as Chair Janet Yellen and Co. are widely expected to retain the current policy, but the Bank of England’s (BoE) ‘Super Thursday’ event may shake up the near-term outlook for GBP/USD should Governor Mark Carney and Co. show a greater willingness to gradually move away from its easing-cycle.

With Chicago Fed President Charles Evans, Philadelphia President Patrick Harker, Dallas Fed President Robert Kaplan and Minneapolis Fed President Neel Kashkari joining the Federal Open Market Committee (FOMC) in 2017, the group of new voting-members are likely to side with the majority and stick with the status quo following the 25bp rate-hike in December. In turn, more of the same from the FOMC may spark a lackluster market reaction, and the U.S. Non-Farm Payrolls (NFP) report may share a similar fate as employment is anticipated to increase 170K in January, while Average Hourly Earnings are projected to pullback from the fastest pace of growth since 2009.

Nevertheless, interest rate expectations appear to be immune to the recent series of mixed data prints coming out of the U.S. economy as Fed Fund Futures continue to highlight a 70% probability for a June-hike, and the dollar may remain supported throughout 2017 as the FOMC appears to be on course to further normalize monetary policy over the coming months. With that said, it seems as though the bar remains high to snap the bullish sentiment surrounding the greenback especially as Chair Yellen sees the central bank ‘closing in’ on its dual mandate.

In the U.K., Parliament begins its two-day debate on the ‘Brexit’ process just ahead of the BoE interest rate decision on February 2, with the British Pound at risk of facing near-term headwinds as the region’s departure from the European Union (EU) clouds the outlook for growth and inflation. However, the Monetary Policy Committee (MPC) may continue to drop its dovish tone and reiterate price growth will

As a result, the fresh updates to the quarterly inflation report (QIR) may sap the bearish sentiment surrounding the British Pound and fuel the near-term advance in GBP/USD should central bank officials further stress ‘there are limits to the extent to which above-target inflation can be tolerated.’