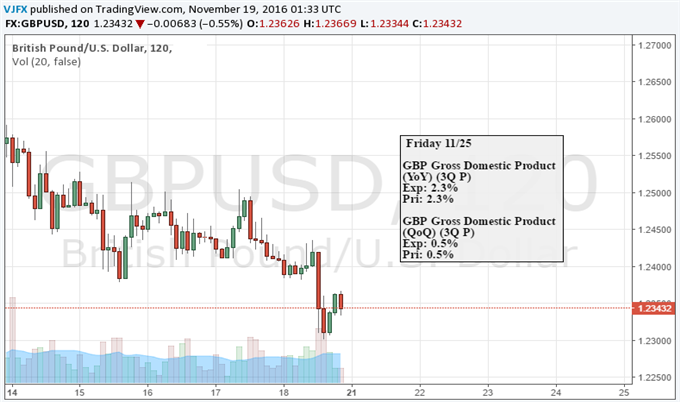 Recent price action casts a bearish outlook for GBP/USD as the recovery from the 2016-low (1.1905) appears to be losing momentum, and the British Pound may continue to give back the rebound following the October ‘flash crash’ should the Autumn Budget Statement highlight a weakened outlook for the U.K. economy.

Hawkish remarks from Bank of England (BoE) Governor Mark Carney failed to prop up the sterling even as the central bank head warned inflation ‘will build towards the end of this year and into 2017’ on the back of the marked depreciation in the local currency.’ In turn, the pound-dollar stands at risk for further losses ahead of the U.K. Budget Statement due out on November 23 as the exchange rate breaks down from a near-term range. Fresh projections from Chancellor of the Exchequer Philip Hammond are likely to reflect the BoE’s expectation for above-target inflation, but may do little to boost the appeal of the British Pound especially if HM Treasury fails to layout a meaningful fiscal stimulus package to insulate the real economy through the ‘Brexit’ movement. The expected rise in the budget deficit is likely to limit Chancellor Hammond’s scope to combat the weakening outlook for growth, and the BoE may have its hands tied in 2017 as central bank officials warn that ‘there are limits to the extent to which above-target inflation can be tolerated.’ High uncertainty surrounding the economic outlook for the U.K. continues to cast a long-term bearish outlook for the sterling, and GBP/USD stands at risk of facing additional losses going into the end of the month amid growing expectations for a December Fed rate-hike.

Fed Funds Futures are now pricing a 95% probability for a year-end move as the central bank argues ‘the case for an increase in the federal funds rate has continued to strengthen,’ and the Federal Open Market Committee (FOMC) Minutes due out next week may reinforce the bullish sentiment surrounding the greenback as Janet Yellen and Co. appear to be following a similar path to 2015. With that said, a hawkish policy statement paired with a rebound in Durable Goods Orders may act as positive catalysts for the dollar, and GBP/USD may revisit the opening monthly range as the near-term recovery loses momentum. Keep in mind that the major currencies are vulnerable to thin market conditions as U.S. traders go offline for the Thanksgiving holiday. 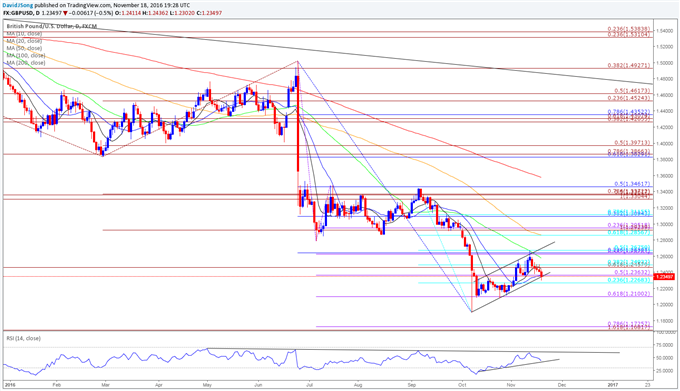 Failure to preserve the near-term range may open up the downside targets, with GBP/USD struggling to preserve the ascending channel formation carried over from the previous. A closing price below 1.2360 (50% expansion) may coincide with a bearish development in the Relative Strength Index (RSI) as the oscillator comes up against trendline support, and a break of the near-term trends may open up the next downside target around 1.2270 (23.6% retracement) followed by 1.2100 (61.8% expansion), with the ‘flash crash’ low (1.1905) on the radar. - DS