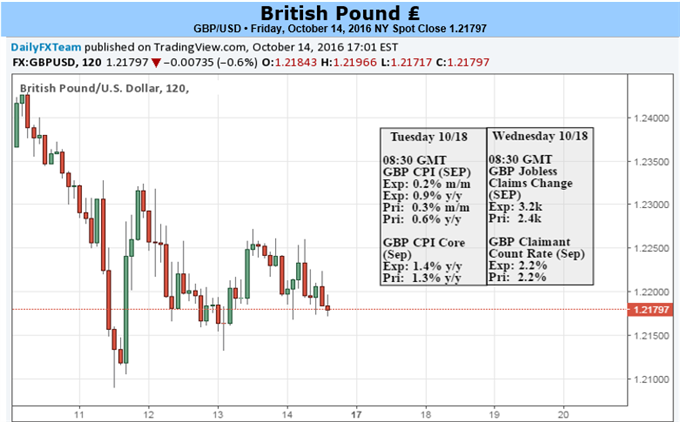 Key developments coming out of the U.S. & U.K. may push GBP/USD out of a narrowing range even though the Federal Open Market Committee (FOMC) remains in no rush to raise the benchmark interest rate, while the Bank of England (BoE) appears to be altering its monetary policy outlook following the British Pound ‘flash crash.’

Stickiness in the U.S. Consumer Price Index (CPI) paired with fresh comments from Fed Vice-Chair Stanley Fischer, San Francisco President John Williams, Dallas Fed President Robert Kaplan, New York Fed President William Dudley and Fed Governor Jerome Powell may heighten the appeal of the greenback as central bank officials appear to be following a similar path to 2015 and make a more collective effort to prepare households and businesses for a December rate-hike. However, the committee may continue to endorse a ‘gradual’ path in normalizing monetary policy especially as Fed officials scale back their interest-rate forecasts, and the FOMC looks poised to preserve the current policy ahead of the U.S. Presidential elections in November as the policy meeting minutes warn ‘survey-based measures of longer-run inflation expectations were little changed, on balance, while market-based measures of inflation compensation remained low.’ With that said, the near-term resilience in the greenback may gather pace over the coming days, but the reserve currency stands at risk of facing headwinds going into 2017 should the central bank largely endorse a wait-and-see approach for the year ahead.

At the same time, signs of stronger U.K. inflation accompanied by a pickup in retail spending by may curb the bearish sentiment surrounding the sterling as BoE officials continue to drop their dovish tone and see a greater risk of above-target price growth. Even though BoE Governor Mark Carney argues the central bank is willing to tolerate ‘some inflation overshoot,’ it seems as though the marked depreciation in the British Pound is becoming a growing concern within the Monetary Policy Committee (MPC) as Deputy Governor Jon Cunliffe warns the next quarterly inflation due out on November 3 will reflect the sharp decline in the exchange rate. As a result, the central bank may have little choice but to stay on the sidelines throughout the remainder of the year in an effort to combat the risk for stagflation. A series of positive U.K. data prints may fuel a near-term recovery in the British Pound as market participants push out bets for the next BoE rate-cut, but the broader outlook for GBP/USD remains tilted to the downside as the growing threat of a ‘hard Brexit’ undermines the better-than-expected developments coming out of the real economy.

GBP/USD may continue to face range-bound prices going into the week ahead as it appears to be stuck in a short-term triangle/wedge formation, but the pair stands at risk of extending the decline from earlier this month on a close below 1.2100 (61.8% expansion) as it appears to be offering near-term support. The next downside region of interest comes in around 1.1680 (161.8% expansion) to 1.1730 (78.6% expansion), with the Relative Strength Index (RSI) reinforcing a bearish outlook for GBP/USD as the oscillator continues to sit in oversold territory and preserves the bearish trend carried over from the previous month.