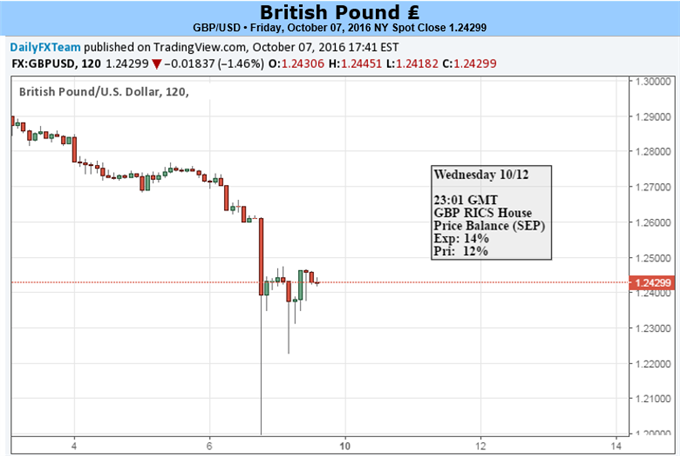 The British Pound ‘flash crash’ is likely to gain increased attention as a slew of Bank of England (BoE) officials are scheduled to speak over the days ahead, but the abrupt depreciation in the sterling may encourage the central bank to endorse a wait-and-see approach for monetary policy as it heightens the risk of overshooting the 2% target for inflation.

Fears of a ‘hard-Brexit’ may continue to weigh on the British Pound as European Union (EU) officials advocate a stern stance in the U.K.’s departure, and heightening uncertainties surrounding the economic outlook may put increased pressure on the Monetary Policy Committee (MPC) to further support the real economy especially as Chancellor of the Exchequer Philip Hammond sees the region facing a period of ‘brief turbulence’ during the transition. The fresh rhetoric from BoE Governor Mark Carney and Co. may drag on the local currency as ‘a majority of members expect to support a further cut in Bank Rate to its effective lower bound,’ but it seems as though the central bank is in no rush to implement more non-standard measures as ‘news on the near-term momentum of the UK economy had, however, been slightly to the upside relative to the August Inflation Report projections.’ Even though the broader outlook for the British Pound remains tilted to the downside, the British Pound may experience a larger correction should BoE officials soften their dovish outlook and talk down bets for an imminent rate-cut.

In regards to the U.S., the weaker-than-expected Non-Farm Payrolls (NFP) report appears to have had a limited impact on interest-rate expectations as Fed Funds Futures continue to highlight a greater than 60% probability for a December rate-hike, and central bank officials may take a more collective approach in preparing U.S. households and businesses for higher borrowing-costs as the economy approaches ‘full-employment.’ Comments from Chicago Fed President Charles Evans, Minneapolis Fed President Neel Kashkari, New York Fed President William Dudley, Kansas City Fed President Esther George, Philadelphia Fed President Patrick Harker, Boston Fed President Eric Rosengren and Chair Janet Yellen may spur a greater market reaction than the FOMC meeting minutes as the committee appears to be following a similar path to 2015, and the near-term strength in the greenback may gather pace should the key U.S. data prints reinforce expectations for a ‘moderate’ recovery. With that said, a 0.6% rebound in U.S. Retail Sales accompanied by another pickup in the U. of Michigan Confidence survey may fuel the near-term appreciation in the dollar as it boosts the outlook for growth and inflation. 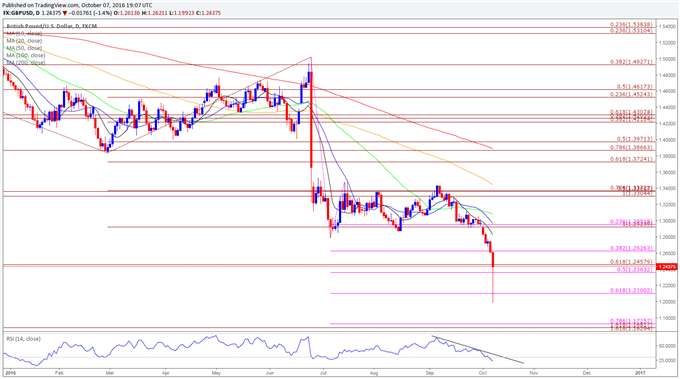 The 1.2000 handle appears to be offering psychological support amid the sharp rebound following the GBP/USD ‘flash crash,’ but the broader outlook remains tilted to the downside as the exchange rate continues to carve a near-term series of lower highs & lows, while the Relative Strength Index (RSI) pushes into oversold territory. The bearish trend in price & the RSI continues to favor the approach of looking for opportunities to sell-bounces in the pound-dollar, with former support around 1.2920 (100% expansion) to 1.2950 (23.6% expansion) seen as new resistance.