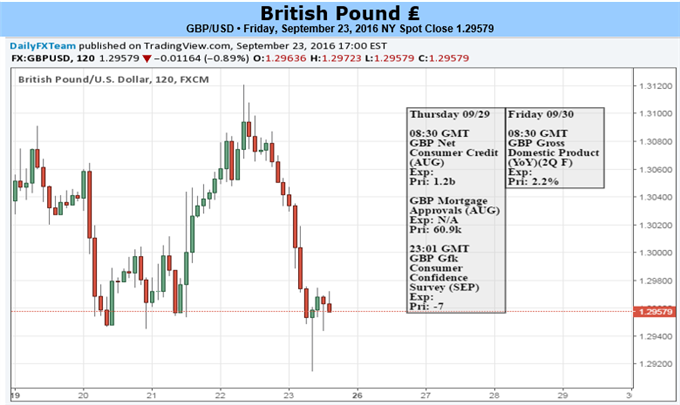 With a slew of Federal Reserve officials scheduled to speak throughout the last full-week of September, the fresh batch of central bank rhetoric may generate new monthly lows in GBP/USD should they boost market expectations for a 2016 rate-hike.

With the Bank of England’s (BoE) next interest-rate decision due out on October13, market participants may see a shift in the policy outlook as board member Kristin Forbes endorses a wait-and-see approach and argues the ‘initial effect on the UK economy of the referendum has been less stormy than many expected.’ In turn, a growing number of BoE officials may also warn that they are ‘not yet convinced that additional monetary easing will be necessary to support the economy,’ and Minouche Shafik may highlight a similar tone next week as the Deputy Governor is scheduled to attend a Bloomberg News event on September 28. The broader outlook for the British Pound remains bearish as the U.K. prepares to depart from the European Union (EU), but the less-dovish remarks coming out of the BoE may limit the downside risk for the sterling especially as Governor Mark Carney rules out a zero-interest rate policy (NIRP) for the region. 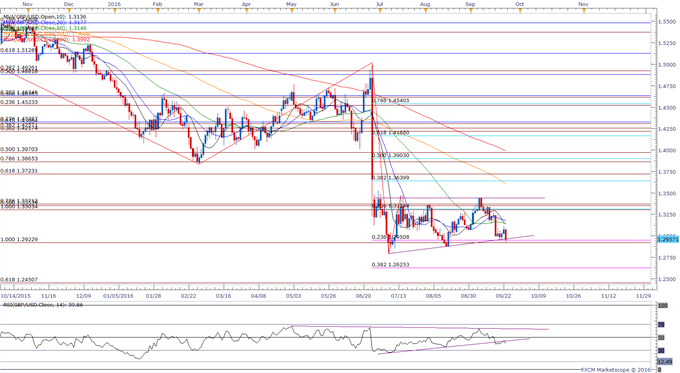 GBP/USD stands at risk of breaking down from the triangle/wedge formation carried over from the previous month as the pair trades to fresh monthly lows going into the final week of September, and the Relative Strength Index (RSI) appears to be highlighting a similar dynamic as it fails to preserve the bullish formation carried over from the summer months. In turn, a break/close below the Fibonacci overlap around 1.2920 (100% expansion) to 1.2950 (23.6% expansion) may open up the next downside area of interest around 1.2630 (38.2% retracement), but the pound-dollar may continue to consolidate within a wedge/triangle formation should Fed officials fail to prop up interest-rate expectation.