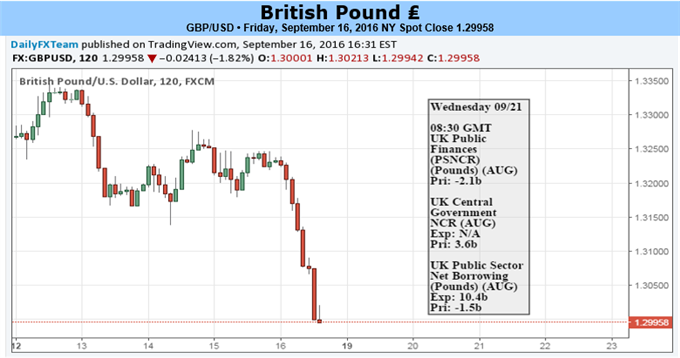 Even though Fed Funds Futures highlight a less than 20% probability for a September rate-hike, Chair Janet Yellen and Co. may following a similar path to 2015 and prepare U.S. households and businesses for a move in December as central bank officials see the U.S. economy at or near ‘full-employment.’ Indeed, prospects for higher borrowing-costs later this year should boost the appeal of the greenback especially as the Fed’s major counterparts continue to embark on their easing cycle, but the fresh updates (growth, inflation and the interest rate dot-plot) coming out of the central bank may spark a mixed reaction in the dollar should the new projections highlight a more ‘gradual’ path for the normalization cycle. Another downward revision in the Fed’s economic projections accompanied by a lower trajectory for future interest-rates may undermine the near-term strength in the U.S. dollar, and Chair Yellen may attempt to tame market expectation ahead of 2017 as the committee continues to warn ‘most survey-based measures of longer-run inflation expectations were little changed, on balance, while market-based measures of inflation compensation remained low.’

For the U.K., the economic docket remain fairly light following the Bank of England (BoE) meeting, with the central bank keeping the benchmark interest rate at the record-low of 0.25% in September, but the British Pound remains at risk of facing additional headwinds over the near to medium-term as the central bank warns ‘a majority of members expect to support a further cut in Bank Rate to its effective lower bound.’ It seems as though the BoE will take further steps to insulate the real economy as the new government prepares to depart from the European Union (EU), but the sterling may face range-bound conditions until Article 50 in enacted as Governor Mark Carney rules out a zero-interest rate policy (ZIRP) for the U.K. Indeed, the Monetary Policy Committee (MPC) may become increasingly hesitant to push monetary policy further into uncharted territory as the central bank runs the risk of overshooting the 2% target for inflation, and the BoE may look to conclude its easing cycle by the end of 2016 especially as U.K. lawmakers mull a fiscal stimulus package following the results of the referendum. With that said, market participants are likely to pay close attention to the headlines next week as Bank of England Governor Carny and board members Jon Cunliffe as well as Kristin Forbes as scheduled to speak in the days ahead. 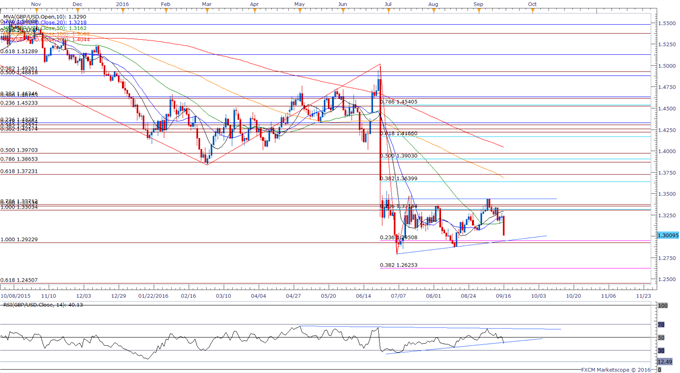 In turn, GBP/USD may continue to shed the advance from the August low (1.2854), with the exchange rate failing to preserve the monthly opening range, and the pair may ultimately threaten the post ‘Brexit’ wedge/triangle formation in the days ahead should the FOMC meeting boost interest-rate expectations. However, the pair may continue to consolidate within the near-term holding pattern if Fed officials largely endorse a wait-and-see approach for monetary policy and show a greater willingness to further delay the normalization cycle.