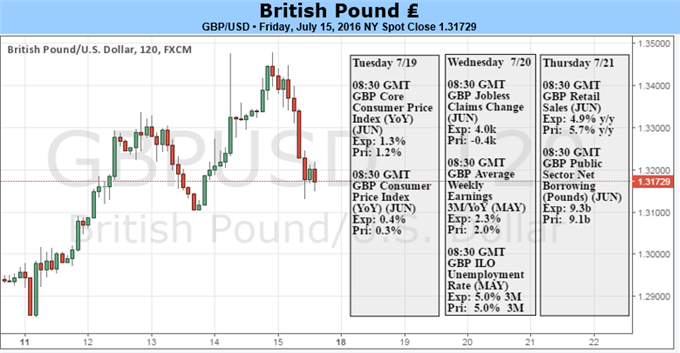 The British Pound strengthened for only the second week of the past seven as a key surprise out of the Bank of England and positive political developments eased financial market tensions. Yet British Pound volatility remains likely as many questions remain on the Post-Brexit future for the UK. A busy UK economic calendar in the week ahead could spark some short-term currency moves, but the bigger volatility could come on the far less predictable political headlines out of Britain.

The Bank of England sent the British Pound sharply higher as it unexpectedly kept interest rates unchanged in its first post-referendum meeting. A Bloomberg News poll showed the vast majority of economists expected the BoE to cut its main target rate by 25 basis points, and Overnight Index Swaps (OIS) priced in an 80+ percent chance of such a move. The post-meeting statement nonetheless showed the Bank of England Monetary Policy Committee voted 8-1 to leave rates unchanged—the surprise forced many traders holding GBP-short positions to close them in a hurry.

Subsequent Bank of England commentary nonetheless makes it clear that interest rates will likely be cut and monetary policy eased in coming months, and we see reason to believe the recent British Pound rally could be short-lived. The most recent CFTC Commitment of Traders report shows that large speculators remain heavily short the GBP versus the US Dollar; the fact the Pound would rally on the lack of bad news is perhaps unsurprising. It is nonetheless clear overall price momentum favors continued British Pound weakness, and indeed it would take a substantial swing in trader sentiment to force a similarly meaningful change in price trends.

We will keep an eye on a busy week of UK economic data with inflation, unemployment, and retail sales figures due on three consecutive days starting July 19. The fact that all of these releases measure economic activity leading into the UK Referendum means it would take a noteworthy surprise in either direction to elicit strong market reactions. Indeed, it will be far more important to watch trends after the UK electorate voted to leave the European Union.

Uncertainty surrounding the post-Brexit UK economy will keep traders on edge for some time to come, and it is difficult to imagine that anything short of final resolution on Britain’s status in the EU will eliminate tensions. Traders sent the British Pound higher on news that Theresa May would become the new Prime Minister—heading off what was expected to be a multi-month process. Yet the hard work is yet to come as May assembled her cabinet but has not yet indicated when her government would invoke the formal process of negotiating Britain’s exit from the European Union.

The critical question is subsequently straightforward—will Britain maintain its free-trade status with the broader European Union? Of course the answer seems substantially less clear. Politicians have clearly stated their intentions to keep the UK within the free trade zone as it is clearly economically advantageous to do so. Yet it is critical to note that any such arrangements with the EU member countries must be ratified by all—the remaining 27 member states. Given substantially different interests and politics across continental Europe, the UK will almost certainly need to make costly concessions to maintain its privileged trading status.

The UK stands at a significant crossroads, and the uncertainty will almost certainly continue to weigh on domestic markets and the British Pound through the foreseeable future. Voting to leave was easy; negotiating for special status may be substantively more difficult. - DR