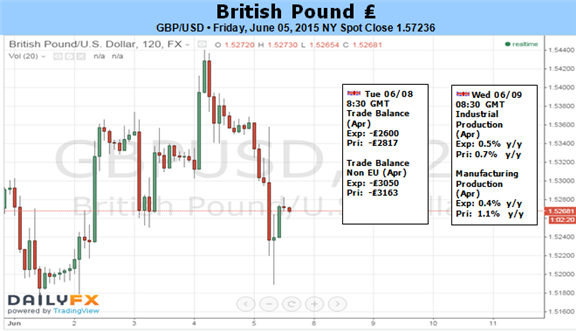 The economic data prints coming out of the U.K. & U.S. should continue to drive GBP/USD volatility in the week ahead as market participants weigh the outlook for monetary policy.

Despite the limited market reaction to the Bank of England’s (BoJ) June 4 interest rate decision, a further expansion in U.K. production may put increased pressure on Governor Mark Carney to lift the benchmark interest rate off of the record-low as the central bank anticipates a stronger recovery to materialize over the course of the year. As a result, signs of a more robust recovery may heighten the appeal of the British Pound, with the sterling continuing to outperform against its major counterparts, but GBP/USD remains at risk for a further consolidation over the near-term until we see a greater dissent within the Monetary Policy Committee (MPC).

In contrast, the 280K expansion in U.S. Non-Farm Payrolls (NFP) certainly raises the Federal Open Market Committee’s (FOMC) scope to remove the zero-interest rate policy (ZIRP) in 2015, and we may see growing bets for a rate hike in the second-half of the year as the Advance Retail Sales report is expected show a 1.2% rebound in May. However, the persistent slack in private-sector consumption may ultimately generate another disappointing print, and we may see a tightening rate between the Fed and the BoE to normalize monetary policy especially as the International Monetary Fund (IMF) prefers higher U.S. borrowing-costs in 2016.

With that said, the opening range for June will largely be in focus going into the key event risks line up for the week ahead, and a round of positive U.S. data prints may heighten the appeal of the greenback as the Fed is likely to retain an upbeat tone at the June 17 interest rate decision. On the other hand, a dismal consumption report may undermine the Fed’s expectation for a stronger recovery, and the pound-dollar may threaten the series of lower-highs carried over from the previous month should the data prints point to a further delay in Fed liftoff. - DS