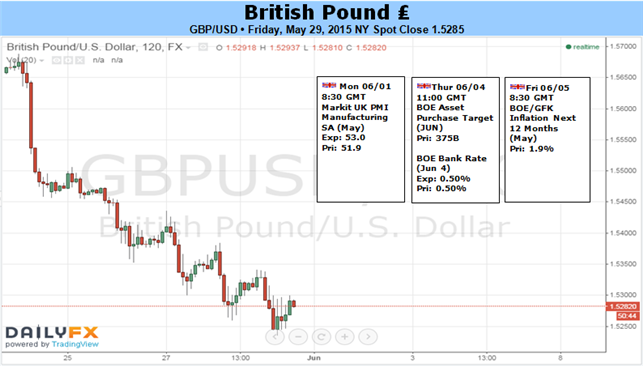 GBP/USD remainsat risk of facing a further decline in the week ahead should the fundamental developments coming out of the U.K. & U.S. heighten bets of seeing the Federal Reserve normalize monetary policy ahead of the Bank of England (BoE).

The BoE’s June 4 meeting may spur a limited market reaction as the central bank is widely expected to retain its current policy, and the lack of fresh central bank rhetoric may put greater emphasis on the U.S. data prints as Fed officials continue to see a rate hike in 2015. As a result, major economic developments coming out ahead of the Federal Open Market Committee’s (FOMC) June 17 interest rate decision may play an increased role in driving market volatility as BoE members show a greater willingness to normalize monetary policy in 2016.

However, the ongoing slack in the U.S. economy may continue to produce a mixed batch of data prints, and the Fed may largely discuss a further delay in liftoff as disinflationary environment undermines the central bank’s scope to achieve the 2% target for price growth. At the same time, positive developments coming out of the U.K. could highlight a tightening race between the Fed & BoE as Governor Mark Carney sees the spare capacity being fully-absorbed over the next 12-months, and we may see a growing dissent within the Monetary Policy Committee (MPC) in the coming months as a growing number of central bank officials prepare households and businesses for higher borrowing-costs.

Nevertheless, the recent string of lower highs & lows in GBP/USD raises the risk for a further decline in the exchange rate, and the pair may continue to give back the rebound from 1.4564 (April low) as it fails to retain the bullish formations carried over from the previous month. In turn, the next downside region of interest comes in around 1.5190, the 50% Fibonacci retracement from the April advance. - DS