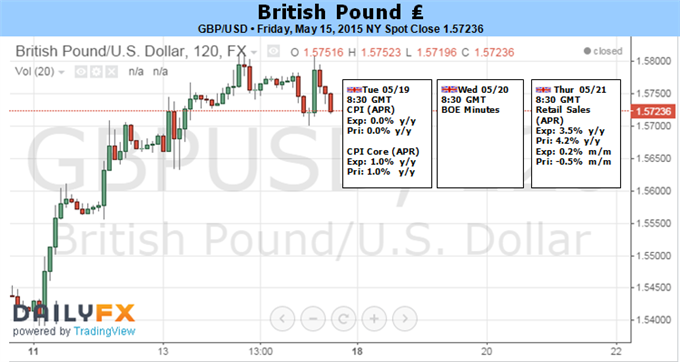 The near-term advance in GBP/USD may gather pace in the week ahead should the fundamental developments coming out of the U.K. economy put increased pressure on the Bank of England (BoE) to normalize monetary policy sooner rather than later.

The BoE looks poised to carry its current policy into the second-half of 2015 as the board narrows its 2015-17 growth forecast, but it seems as though the central bank remains on course to switch gears over the medium-term as Governor Mark Carney continues to prepare households and businesses for higher borrowing-costs. Despite the more neutral tone laid out in the BoE’s quarterly inflation report (QIR), stickiness in the core U.K. Consumer Price Index (CPI) paired with a rebound in Retail Sales may encourage an improved outlook for the region, and the central bank’s policy meeting minutes may reveal a growing dissent within the Monetary Policy Committee (MPC) as the economy gets on a firmer footing.

At the same time, fresh comments from MPC members Martin Weale and Nemat Shafik may also heighten the appeal of the British Pound amid the growing consensus that ‘the most likely next move in monetary policy will be a gradual and limited increase in interest rates.’ The monetary policy outlook may pave the way for a larger advance in the exchange rate as the ongoing series of weaker-than-expected U.S. data raises the risk for a further delay in the Fed’s normalization cycle and tightens the race for higher rates with the BoE.

In turn, GBP/USD may continue to retrace the decline from July 2014 as market participants push back expectations for a Fed rate hike, and positive developments coming out of the U.K. may heighten the near-term bullish sentiment surrounding the sterling as the BoE retains a hawkish forward-guidance for monetary policy.