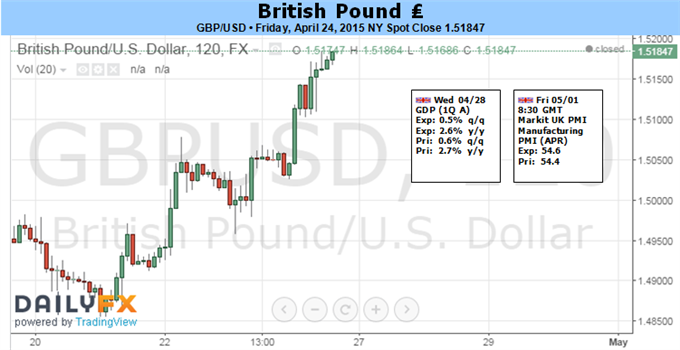 An important jump in interest rate expectations helped push the British Pound to fresh two-month highs versus the US Dollar. Yet a great deal of uncertainty surrounding upcoming UK Elections could slow gains as traders prepare for potential volatility.

The coming week will be an important one for the UK and broader financial markets as national agencies release British and US Gross Domestic Product (GDP) growth figures for the first quarter, while a highly-anticipated US Federal Reserve policy meeting and Nonfarm Payrolls report will likewise drive market volatility.

Last week we argued that fundamental strength could fuel a sustained GBP reversal, and indeed recent developments suggest the British Pound could claw back further losses through upcoming trade. The key caveat is that any number of top-tier economic data releases and events in the coming two weeks could change outlook. Any large surprises out of upcoming UK GDP figures could have an especially significant impact for Sterling pairs. And the US Fed decision as well as NFPs results always threatens major moves in USD currency pairs.

The true test for the Sterling may ultimately come in the following week as there remains a great deal of uncertainty surrounding UK Elections. A sharp jump in GBPUSD volatility prices/expectations underlines the risk, and it remains especially difficult to predict the outcomes of the elections and much less implications for the GBP itself.

We remain cautiously bullish the British Pound as recent Bank of England rhetoric suggests that domestic interest rates may rise sooner than expected. Yield-seeking investors continue to favor currencies with higher rates of return, and interest rate differentials remain one of the most important drivers of exchange rate volatility. The key question is whether upcoming data and/or political uncertainty can derail what seems to be the start of a larger reversal for the UK currency.