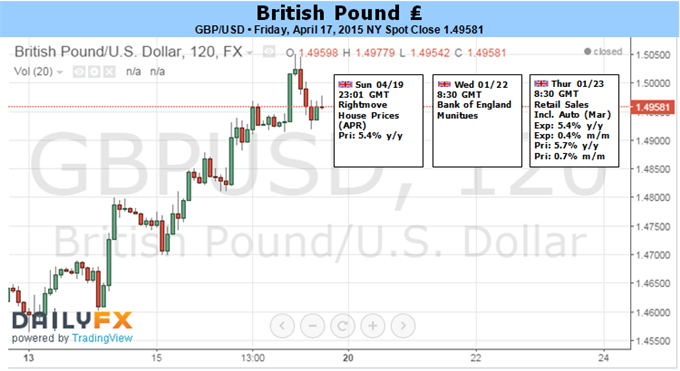 Impressive UK employment data helped push the British Pound sharply higher versus the US Dollar and other major counterparts, and the recent reversal in fortunes leaves us in favor of continued GBP gains through the foreseeable future.

The FX market is a question of relative performance, and the fact that US economic data and interest rate expectations have been notably better than their UK equivalents helps explain why the British Pound/US Dollar exchange rate recently fell to five-year lows. Yet things have turned for the US currency as a recent tumble in domestic yields have left it at a lesser advantage versus the British Pound and others. The difference between UK and US 2-year government bond yields now stands near its smallest since November, 2014, and the GBP/USD exchange rate has moved higher in kind.

Traders will look to upcoming Bank of England Monetary Policy Committee minutes to drive moves in UK interest rates, while a relatively empty US economic calendar suggests broader market volatility may slow through the coming week. The key question is whether recent improvements in UK economic data will be enough to force the Bank of England into action sooner than currently expected.

Headline UK Consumer Price Index inflation printed at exactly 0.0 percent through March—well-below the BoE target of 2.0 percent. This fact in itself suggests the central bank will be in no rush to raise rates through the foreseeable future. And yet recent employment numbers show domestic unemployment has fallen to seven-year lows, while broader consumption and economic activity data points to strong growth through 2015. All else remaining equal, the improvement in the data should have been enough to send the British Pound even higher.

The critical point remains that political uncertainty surrounding UK elections on May 7 have hurt the British Pound against major counterparts. Derivatives markets show that GBP/USD volatility prices/expectations trade near multi-year highs given clear indecision in UK electoral poll figures. Ultimately, however, fears over post-election political disarray may be overdone. And indeed further improvements in economic data and interest rate expectations could fuel a larger British Pound recovery versus the US Dollar and other major FX counterparts.