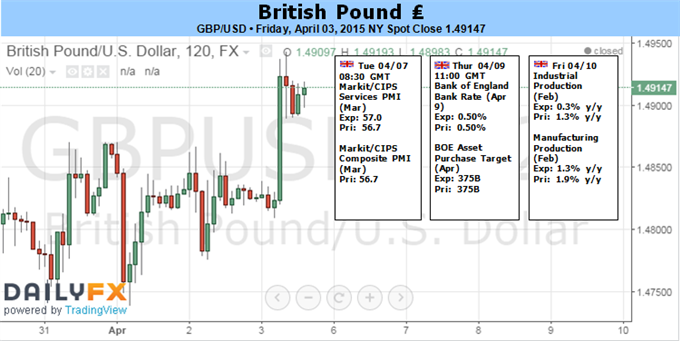 British Pound at Risk of Declines Given Political Uncertainty

The British Pound finished the week almost exactly where it began, first falling versus the US Dollar until a sharp USD sell-off sent the GBP/USD through key levels. A relatively quiet week ahead may produce much of the same absent a surprise from a Bank of England policy meeting.

Traders look to an upcoming Bank of England Monetary Policy Committee meeting for any surprises, but low FX volatility prices suggest few expect officials will make changes to policy or release a post-meeting statement. Economic releases will be limited to UK Markit PMI figures, Trade Balance data, and Industrial Production growth reports. It would take a material surprises out of any of these reports to force a meaningful reaction across GBP pairs.

Markets remain indecisive as we’re now just a month away from the UK General Election, and current polling shows no single party is likely to take an overall majority following the May 7 vote. In effect, the United Kingdom could remain without an effective government for six weeks. The British Pound is likely to suffer amidst such uncertainty.

Derivatives show that FX options traders are paying a substantial premium for bets on/hedges against GBP/USD weakness in two months’ time—the exact timeframe for the post-election uncertainty. And indeed, risks seem weighed to the downside for the British Pound through the foreseeable future. A recent US Dollar sell-off has kept the GBP/USD above key support, but the UK currency may continue to underperform against broader G10 counterparts.