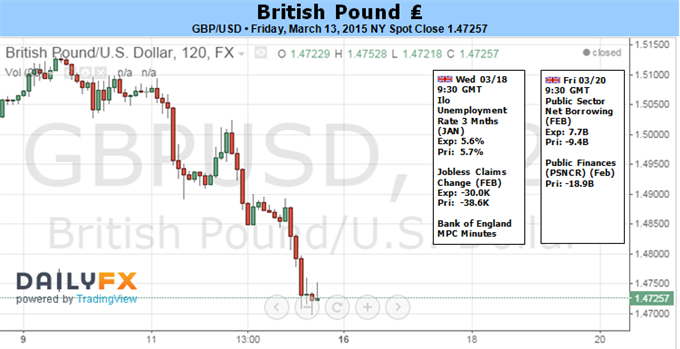 British Pound Volatility Near-Guaranteed – Which Way Will it Break?

The British Pound tumbled to fresh five-year lows versus the high-flying US Dollar as traders repriced UK interest rate prospectives. Can a key Bank of England MPC Minutes report boost the Sterling ahead of a critical US Federal Reserve interest rate decision?

A potentially pivotal week ahead points to major volatility across GBP pairs, and whether or not domestic yields can recover versus the USD equivalents will likely determine direction in the GBPUSD. The fact that the Sterling actually trades near 8-year highs versus the Euro (EURGBP lows) helps explain the significance of interest rate differentials. Traders have sent the Euro to major lows across the board as the European Central Bank cuts interest rates into negative territory, while the Sterling remains a relative outperformer as a higher-yielding European alternative.

Will Bank of England MPC Minutes boost expectations for the future of domestic interest rates? As it stands, interest rate derivatives currently predict that the BoE and the US Fed will be the only two G10 central banks to raise interest rates in the coming 12 months. Yet the Sterling has fallen significantly versus the US Dollar as BoE Governor Mark Carney dampened speculation that rate hikes were imminent. Carney highlighted GBP appreciation (versus the Euro) as a key reason to keep interest rates lower for longer. It seems like a paradox: the GBP remains strong because of beneficial interest rate expectations, but currency strength itself makes those same rate hikes less likely.

Short-term forecasts for the Sterling seem especially uncertain ahed of the release of Bank of England MPC Meeting Minutes and a highly-anticipated US Federal Open Market Committee meeting. FX options traders have sent 1-week and 1-month GBPUSD volatility prices/expectations to their highest since the Scottish Referendum. And with uncertainly surrounding upcoming UK Government Elections, traders may prove especially skittish on any surprises.

It’s shaping up to be a make-or-break week for the Sterling—can the Bank of England force it higher versus the high-flyinig USD?