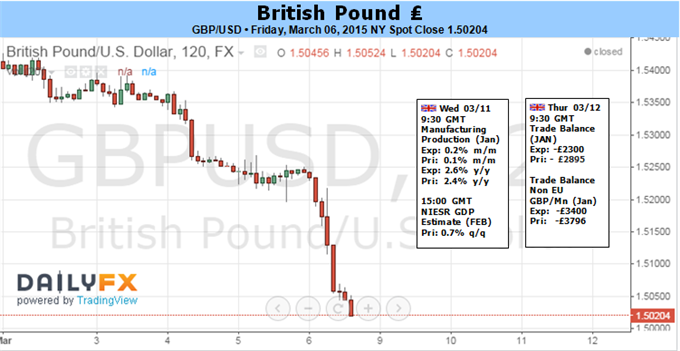 The British Pound finished the week sharply lower versus the resurgent US Dollar as it fell for five consecutive trading days and finished barely above key multi-year lows. Yet fundamentals for the UK currency remain stable, and we expect it to outperform the Euro and other currencies through the foreseeable future.

A relatively empty week of UK economic data and events suggests that Sterling volatility will slow in the days ahead, but clearly one-sided price momentum warns that a test of key price support at $1.50 is imminent. A break below the psychologically significant level would leave little in the way of price support until five-year lows near $1.48 and eventually the post-financial crisis trough near $1.4250. Yet we put relatively low odds on such a large Sterling move—particularly as the UK currency holds its ground versus the Euro and other major counterparts.

The British Pound rallied noticeably versus the downtrodden Euro as the European Central Bank announced it would begin fairly aggressive Quantitative Easing policies from March 9, and indeed sharply diverging central bank policies leave the GBP in an enviable position. Overnight Index Swaps show that traders predict the Bank of England and the US Federal Reserve will be the only two G10 central banks to raise interest rates in the coming 12 months. All else equal, we believe this fact will continue to support both the GBP and USD through the foreseeable future. That said, the US Dollar has arguably rallied far more than interest rate differentials have changed.

Sharp GBPUSD declines seem unsustainable given a sanguine UK economic outlook, but calling for a meaningful US Dollar reversal has been a fool’s errand. We’ll keep an eye on any significant surprises out of upcoming UK Manufacturing Production and NIESR GDP growth figures to drive potential GBP volatility. Yet the bigger issue remains whether the USD can continue on its recent tear and break fresh highs versus the Sterling and other major counterparts.