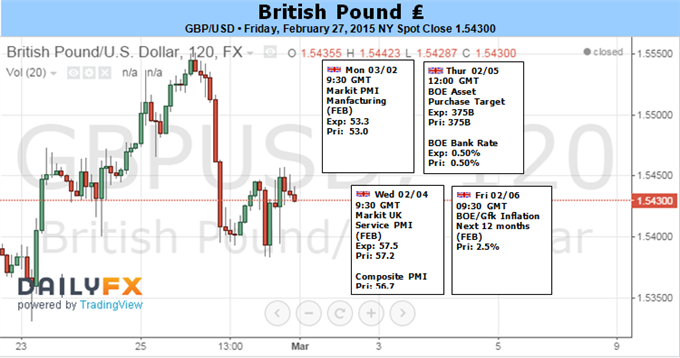 The Bank of England’s (BoE) March 5 interest rate decision may have a limited impact on GBP/USD as the central bank is widely anticipated to retain its current policy, but the fundamental developments coming out of the U.K. may continue to boost the appeal of the sterling should the data prints highlight an improved outlook for growth and inflation.

Following the BoE testimony, it seems as though the Monetary Policy Committee (MPC) will continue to move towards a rate hike especially as Governor Mark Carney only sees a ‘temporary’ decline in U.K. inflation and retains the hawkish forward-guidance for monetary policy. With that said, a further pickup in U.K. Mortgage Approvals along with a faster expansion in the Purchasing Manager Indices (PMI) may boost interest rate expectations as a growing number of central bank officials show a greater willingness to normalize monetary policy over the near to medium-term.

At the same time, the U.S. Non-Farm Payrolls (NFP) report will also largely be in focus as it remains a race between the Fed and the BoE as to who will be the first to normalize monetary policy. Indeed, another 240K expansion in U.S. employment may further the argument for a mid-2015 rate hike, but Chair Janet Yellen and Co. may ultimately share a similar fate to their U.K. counterpart especially as Average Hourly Earnings are expected to narrow to an annualized 2.1% in February. As a result, the disinflationary environment may push the Fed to further delay its normalization cycle, while a pickup in U.K. economic activity may underpin a larger rebound in the British Pound as the central bank continues to prepare households and businesses for higher borrowing-costs.

Nevertheless, the lack of momentum to push and close above the former support zones around 1.5510-55 may produce range-bound prices in GBP/USD ahead of the key event risks, but the pair may make a more meaningful effort to retrace the decline from the previous year should the fundamental developments sway the interest rate outlook for the U.S. and U.K. As we open up the March trade, the opening monthly range may dictate the short-term outlook for the pound-dollar as the Fed is scheduled to deliver its next interest rate decision on March 18.