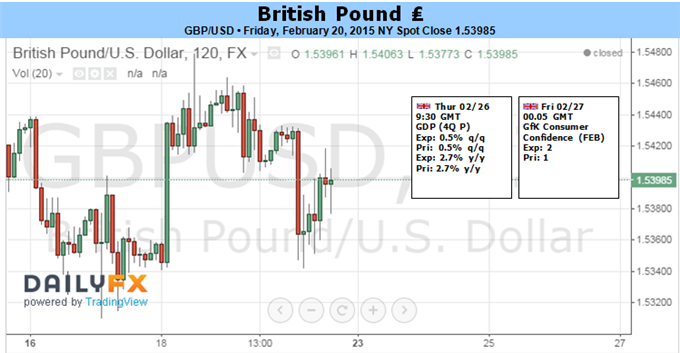 The British Pound edged upward for a fourth consecutive week against the US Dollar but momentum clearly slowed amid the markets’ preoccupation with Greek debt woes. Close to half of UK exports are destined for markets in the Eurozone, making the economy highly sensitive to turmoil across the English Channel. Furthermore, Sterling has often acted as a regional safe haven at times when the viability of the Euro has come into question, opening the door for volatility in the event of an adverse outcome.

Looking ahead, the clouds appear to be parting. As we suspected, Greek Finance Minister Yanis Varoufakis and his Eurogroup counterparts reached an eleventh-hour accord securing a four-month extension on the flow of bailout funds. Meanwhile on the domestic front, January’s CPI data showed the core year-on-year inflation rate – a measure excluding volatile food and energy prices that the Bank of England says it will overlook in setting policy – rose for a second month to 1.4 percent.

This opens the door for the UK unit to resume trading on recovering rate hike speculation triggered by a hawkish-sounding Bank of England Quarterly Inflation Report (as expected). The document’s pro-tightening message may be further reinforced as BOE Governor Mark Carney, Deputy Governor Ben Broadbent and MPC committee member Martin Weale testify about its contents to Parliament’s Treasury Committee. Investors now price in at least one increase in the baseline lending rate over the coming 12 months, with futures markets reflecting bets on a move in the fourth quarter of this year.

External forces may likewise help. Fed Chair Janet Yellen is due to deliver her semi-annual Congressional testimony on monetary policy and the global economic outlook. As with last week’s publication of minutes from January’s FOMC meeting, the outing may carry a disproportionally higher risk of diminishing Fed rate hike bets versus the alternative.

The US Dollar has been unable to rise even when key economic data proved clearly supportive (such as January’s payrolls report) while speculative net-long USD positioning is near a record high. On balance, this warns that the “policy divergence” narrative that propelled the greenback higher since mid-2014 may be running out of fresh fodder. If Yellen restates recently voiced worries about an increasingly wobbly global environment, that may pour cold water on tightening speculation and narrow the spread in the Fed vs. BOE policy outlook. Needless to say, that is likely to encourage the Pound upward.