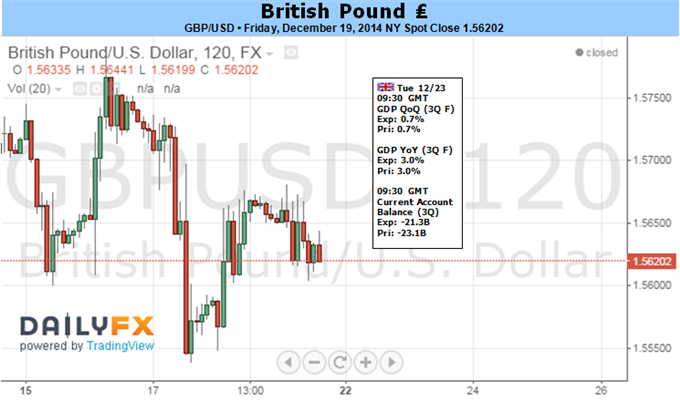 The British Pound traded higher versus all G10 counterparts save the US Dollar and Japanese Yen. Why might it continue higher through the foreseeable future?

There’s relatively little in the way of foreseeable economic event risk out of the UK next week, and that may in fact play in the domestic currency’s favor. It was only two weeks ago when GBP/USD volatility prices traded to multi-year peaks, and a negative correlation between vols and the GBP helped explain why it fell sharply on clear uncertainty. Yet in a remarkable shift in sentiment, the Sterling now boasts the lowest volatility prices of any G10 currency. If correlations hold firm, this may be enough of a reason for continued appreciation.

A key exception comes from final revisions to Q2 Gross Domestic Product growth numbers due Tuesday, but surprises are relatively unlikely and only a big miss would force important GBP volatility. Beyond that, traders will keep an eye on the usual slew of early-month US economic event risk—especially the end-of-week US Nonfarm Payrolls report.

With the Scottish Independence Referendum now past, the UK currency can return to basics and trade off of traditional fundamental factors. Credit Suisse Overnight Index Swaps show that the Bank of England will raise benchmark interest rates by approximately 0.50 percentage points in the coming 12 months. This may not seem like much, but it is only second to the US Federal Reserve (and US Dollar) at +0.58%.

The clear divergence in growth and yield expectations between the UK and other major economies leaves the GBP in the position of strength. And though an obvious US Dollar uptrend makes us reluctant to buy into GBPUSD weakness, we believe the UK currency could trade higher through the coming week and perhaps month.