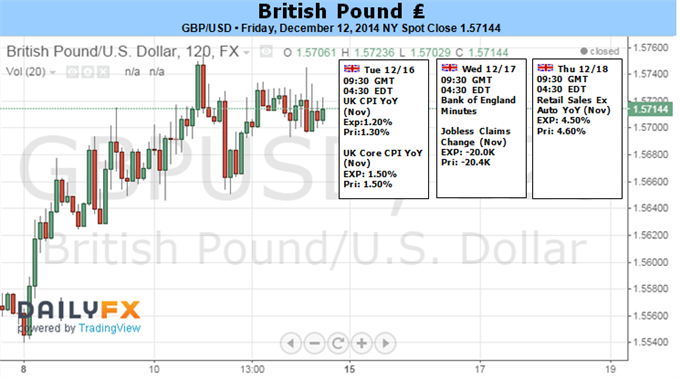 British Pound May Finally Mount a Sustained Recovery versus USD

The British Pound finished the week modestly higher but continued to trade in a tight range versus the US Dollar. A busy week ahead threatens to force a decisive break in the GBPUSD and other pairs.

The simultaneous release of UK Jobless Claims and Earnings data with Bank of England Minutes will likely prove the highlight in the days ahead, and GBPUSD traders should likewise keep a close eye on a highly-anticipated US Federal Reserve interest rate decision that same day. Earlier-week UK Consumer Price Index inflation figures as well as late-week UK Retail Sales results could also elicit reactions from GBP pairs.

Whether or not the Sterling mounts a sustained recovery versus the US Dollar will likely depend on the direction of interest rate expectations for both the Bank of England and the US Federal Reserve. A sharp compression in the spread between UK and US government bond yields helps explain why the British Pound fell to fresh 14-month lows versus the Greenback through November. Yet a great deal of uncertainty surrounds both the Fed and BoE; any surprises out of the coming week’s economic data and central bank rhetoric could easily force a repricing of yields and the GBPUSD exchange rate.

The US Dollar in particular looks vulnerable on any disappointments from the Federal Reserve, and indeed the previously-unstoppable USD finally showed concrete signs of slowing through the past week of trade. And though the Sterling could itself see fairly significant volatility on UK event risk, we expect that the overall US Dollar trend will ultimately dictate whether the GBPUSD makes a sustained recovery.