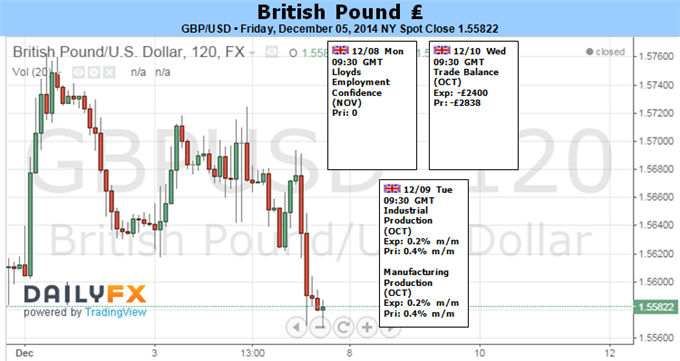 GBP/USD slipped to a fresh monthly low of 1.5568 as U.S. Non-Farm Payrolls marked the largest advance since January 2012, and the pair may continue to track lower in the week ahead should the fundamental developments coming out of the world’s largest economy ramp up bets of seeing the Federal Reserve normalize monetary policy sooner rather than later.

In contrast, it seems as though the Bank of England (BoE) Minutes, due out on December 17, will show another 7-2 split within the Monetary Policy Committee (MPC) as the central bank refrained from releasing a policy statement following the December 4 meeting, and the British Pound may continue to underperform against its U.S. counterparts over the near to medium-term as the majority remains in no rush to normalize monetary policy. Nevertheless, the underlying strength in the sterling is likely to be better seen in crosses rates such as GBP/AUD especially as BoE Governor Mark Carney continues to prepare U.K. households and businesses for higher borrowing costs.

Beyond the U.K. data prints, MPC members Martin Weale and Ian McCafferty, the two dissenters on the MPC, are schedule to speak in the week ahead, and the fresh batch of BoE rhetoric may heighten the appeal of the British Pound as the central bank hawks continue to push for a rate hike. However, the U.S. data prints due out next week may trump the U.K. event risks as market participants gauge interest rate expectations ahead of the next Federal Reserve interest rate decision on December 17, and the bullish sentiment surrounding the greenback may gather pace going into the end of the year should the developments boost interest rate expectations.

With that said, the downside targets for GBP/USD remain favored as price and the Relative Strength Index (RSI) retain the bearish trends from back in July, and another batch of positive data prints out of the U.S. may generate fresh monthly lows in the exchange rate as market participants see the Fed normalizing monetary policy ahead of the BoE.