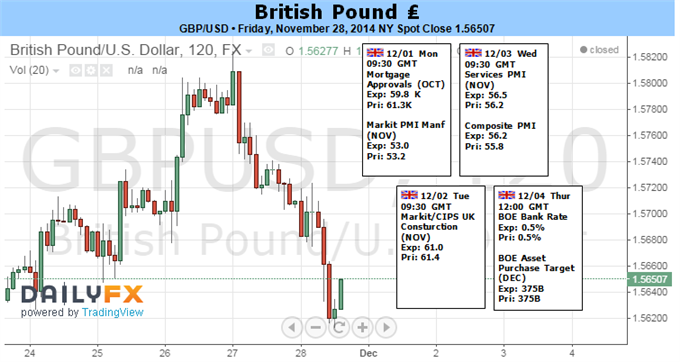 The British Pound finished lower for the sixth-consecutive trading week versus the US Dollar, and a busy week of economic event risk ahead points to GBP volatility and potential losses.

GBP traders will turn attention to the upcoming Bank of England Interest Rate Decision for any surprises, while broader market volatility seems likely on a European Central Bank meeting as well as the monthly US Nonfarm Payrolls labor data release.

The BoE seems unlikely to announce any policy changes at their upcoming meeting, and indeed this is a major reason why the British Pound continues to underperform versus major counterparts. It was in the late summer that a strong wave of UK economic data boosted forecasts for the future of domestic interest rates; the Bank of England seemed likely to raise rates before most G10 counterparts. Yet it was only this week that analysts pushed BoE interest rate forecasts to the third quarter of 2015—lagging behind the US Federal Reserve and other major central banks. Given that the Bank of England does not release a detailed statement on unchaged policy, GBP traders will likely look to the ECB rate decision and US Nonfarm Payrolls to drive moves across Sterling pairs.

The European Central Bank meeting could spark important moves in EUR pairs, and the British currency could move in kind via the EUR/GBP. Risks arguably remain to the topside for the EUR ahead of the event as ECB President Mario Draghi is unlikely to announce fresh easing at the coming meeting. Even downgraded BoE policy forecasts leave the Sterling at an advantage, however. The EUR/GBP will likely remain under pressure as the ECB is likely to keep interest rates lower for longer.

Interest rate differentials will remain in focus on Friday’s US NFPs release as the future of US Federal Reserve monetary policy remains in the balance. Any especially strong labor market data prints could send the US Dollar to fresh highs versus the Sterling and other majors. And yet we would argue that risks remain to the downside as the Greenback surges to fresh peaks across the board.

Long-term seasonality studies suggest that currencies will often set monthly lows/highs at the beginning and end of the month, and the first week of December could see important currency moves ahead of year-end. We will keep a close eye on key data to judge the likelihood of a lasting GBP reversal.